Love and Fatigue in America: An honest, insightful and beautifully written story 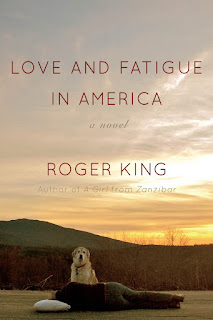 Last March, I had the pleasure of hearing Roger King read from his new book at the Meekins Library in Williamsburg, Mass.  I was impressed by his quiet eloquence, and by the way he managed to convey the truth of what it is like to have ME/CFS without falling into pathos.  For those of us who have the illness, it is a tremendous relief to hear the thoughts and feelings we have all shared expressed with such clarity. Roger King has done a great service to the ME/CFS community in writing this book. I highly recommend it to everyone who has ME/CFS or knows someone with the illness.

You can purchase Love and Fatigue in America on Amazon and Barnes & Noble.  Read more about Roger King here.

Love and Fatigue in America

Roger King’s intimate account of falling ill with the disease known as chronic fatigue syndrome – CFS in the US, myalgic encephalomyelitis (ME) elsewhere – is a rarity. One would expect a memoir documenting a horrific illness to evoke pity. Yet, King’s observations, both of himself and of the country in which he finds himself marooned, are so keen, and so humorous, that it is difficult to feel anything other than admiration. What makes this book stand out among other memoirs is King’s unflinching, yet completely unself-serving honesty. King is not out to shock his audience, or to make them feel his pain. He is merely telling the truth.

As is the case with many immigrants, King, a British citizen, moves to the U.S. in order to start a new life. He had worked for years as a socio-economist in international development, traveling widely throughout Asia and Africa at the behest of the UN. But a fruitless love affair, as well as becoming the unwitting victim of a police conspiracy, provides the impetus for making a fresh start. King’s literary background, as well as his world experience, makes him an excellent candidate for a post in an English department. So, he accepts a position teaching creative writing, literature and screenwriting at “Inland University” (Eastern Washington University), deep in the great American Northwest. With a new novel about to be published, a new life in academia, and the possibility of new love on the horizon, it appears as if King’s wish has come true.

Within a year, King’s dream of starting a new life turns into a nightmare. After recovering from a nasty flu, King goes to a gym to work himself back into health. This is where his world slips sideways. A sudden bout of dizziness, accompanied by profound weakness, forces him to the floor, where King gamely tries to pretend as if he is just dehydrated. But having worked in Africa, King is no stranger to the effects of dehydration. He knows this is something else.

“The pressing weight is enormous, too much for my muscles, which have themselves turned into a dead weight. After receiving an urgent petition from the neck, I let my head drop. My heart has gone deep. It’s beating down there, but very slowly. There’s nothing to do but wait, I tell myself.”

So begins the saga of ME/CFS: a long string of ineffectual doctors (whom King identifies with roman numerals and by nickname: “Grumpy,” “Happy,” “Thumper”), a longer string of useless medications, a string of friends who offer support but don’t really understand what is wrong, and finally, a very long string of states, as King drives from California to Massachusetts looking for a home, looking for love, and trying to outrun his disease.

While the topic of this book is illness – what we think and do when we lose our health, how we adjust, or don’t – the theme is love. In spite of a body that does not let him function, King’s desire for love is unimpeded by his complete inability to seek it, or do anything with it once he has found it. Against all odds, he finds love after all. Mary, a beautiful, accomplished paleontologist, befriends him, and eventually falls in love with him. King now has his heart’s desire … but, as the saying goes, we should be careful of what we wish for.

Ultimately, after love that is simultaneously found and lost, and travels that take him from one coast to the other, King comes to terms with the realities of an incurable illness, achieving an awareness that goes beyond anything we might expect to experience in our short lives. This is the journey’s end.

“I am, this illness has proved, not divisible within myself, not separable from without. My borders are permeable, the border patrol flawed and corruptible. The new understanding is that my self is not a knot of self-regard located in my mind, but some large and labile thing existing beyond my full control in a continuum of brain, body, other living things, and all substance beyond. In short, the nature of CFS is an object lesson in oneness. Which is an object lesson in love. You are lost, yet you are found.”

All of us, whether we have ME/CFS or any other affliction of the body or heart, are lost, yet found. In the beauty of his words, and in his commitment to the truth, King has found us.

Posted by Erica Verrillo at 6:00 AM