Lessons I learned from the end of a stick 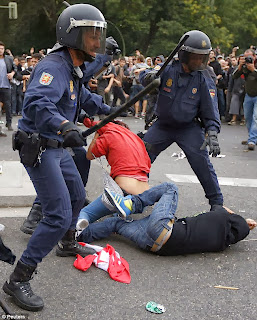 Every once in a while, life gives us a lesson that we will never forget. Mine came on May 6, 1971, in Boston.

On that morning over 3,000 anti-war demonstrators gathered at the JFK Federal Building for a nonviolent sit-down demonstration. We were protesting the mining of the harbors in Vietnam, or perhaps the bombing of Cambodia. I don't remember which, but it was important enough for me to consider doing something public.

The group that had organized the demonstration, the People's Coalition for Peace and Justice, held workshops the previous night to train us in nonviolent protest. The idea was that we were to block the nine entrances to the building by the simple act of sitting down. If anybody tried to remove us, we were to go limp. We were instructed to wear light clothing (T-shirt and jeans), and to put a dime in our shoes. (For the telephone call in case we were arrested.)

The leaders of the demonstration had cooperated with the Boston police, and assured them that this was to be a peaceful demonstration, unlike so many others around the country. At the suggestion of the police, the leaders wore armbands, so that both police and protesters could identify those in charge. This would help maintain order.

As planned, we left our gathering places that morning and walked in an orderly fashion to the federal building. There, we were met by several hundred riot police in full gear.

First, they arrested our leaders, who were easily identified by their armbands. Then, they set their dogs on us. Then they hit us over the head with 3-foot billy clubs. They maced us, flung us into the air like rag dolls, dragged us off bleeding, and, finally, they arrested anyone they hadn't already knocked unconscious. I never got to use my dime, because they didn't let me make my phone call. They just threw me in jail.

The protest leaders placed us in a position of weakness by negotiating away the only weapon we had. We had numbers, and the potential to cause disruption. They had more weapons, lethal ones, but even with those weapons they could not have overcome 3,000 people - if those people had not cooperated.

I look upon the IOM contract, and indeed upon most of what the federal government has said and done to us over the last 30 years, as a battle. Some of us believe that by cooperating, by playing by the rules they have set down for us, by showing them that we can go limp, they will give us what we want.

There is power in numbers. And a million is a big number.