Visual Stress: A Symptom of ME/CFS 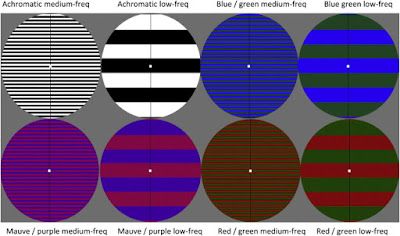 A University of Leicester research team has discovered a vision-related abnormality that could help diagnose ME/CFS.

The abnormality, called "pattern glare," produces distortions, such as curving, wavering, and colors, when viewing stripes. Pattern glare has been associated with migraines and Irlen Syndrome (a visual processing disorder). It can lead to headaches, photophobia, and eyestrain.

This is not the first study to find a correlation between visual disturbances and ME/CFS. In May 2014, an Australian group found a greater occurrence of  Irlen Syndrome in ME/CFS patients (Loew et al. "Symptoms of Meares-Irlen/Visual Stress Syndrome in subjects diagnosed with Chronic Fatigue Syndrome.")

A previous Australian study found significant variations in blood lipids as well as urine amino and organic acids in ME/CFS patients with Irlen Syndrome. They proposed that ocular symptoms might be caused by activation of the immune system due to "some infective agent." (Robinson et al. "A biochemical analysis of people with chronic fatigue who have Irlen Syndrome: Speculation concerning immune system dysfunction.")

Coincidentally, I had an eye exam shortly before the University of Leicester study was published. On viewing a cross-hatch pattern, I remarked that it had blue horizontal stripes, and purple vertical stripes. "It's black and white," said the technician.

Visual stress could be a symptom of Chronic Fatigue Syndrome, research suggests

CFS, also known as Myalgic Encephalomyelitis (ME), is a condition that causes persistent exhaustion that affects everyday life and doesn't go away with sleep or rest. Diagnosis of the condition is difficult as its symptoms are similar to other illnesses.

A research team from the University of Leicester led by Dr Claire Hutchinson from the Department of Neuroscience, Psychology and Behaviour has examined patients with and without CFS and has found that those suffering from the condition are more vulnerable to pattern-related visual stress, which causes discomfort and exhaustion when viewing repetitive striped patterns, such as when reading text.

The results of the study, which is published in the journal Perception, could help in the diagnosis of CFS, as the findings suggest that there are visual system abnormalities in people with ME/CFS that may represent an identifiable and easily measurable behavioural marker of the condition.

Dr Hutchinson explained: "Diagnosis of ME/CFS is controversial. With the exception of disabling fatigue, there are few definitive clinical features of the condition and its core symptoms, overlap with those often prevalent in other conditions. As a result, ME/CFS is often a diagnosis of exclusion, being made as a last resort and possibly after a patient has experienced a series of inappropriate treatments of misdiagnosed disorders.

"It is imperative therefore that research focuses on identifying significant clinical features of CFS/ME with a view to elucidating its underlying pathology and delineating it from other illnesses. Doing so will help researchers and healthcare professionals gain important insights into the condition, aid diagnosis and, in the longer term, inform evidence-based therapeutic interventions."

The study assessed vulnerability of ME/CFS patients to pattern-related visual stress using a standardised test called the pattern glare test, in which people report the number of visual distortions they experience when looking at three repetitive striped patterns of different levels of detail.

Participants viewed 3 patterns, the spatial frequencies (SF) of which were either 0.3 (low-SF), 2.3 (mid-SF) and 9.4 (high-SF) cycles per degree (c/deg). They then reported the number of distortions they experienced when viewing each pattern.

Patients with ME/CFS reported more distortions on the intermediate striped pattern (Pattern 2) than people without the condition.

Dr Hutchinson added: "The existence of pattern-related visual stress in ME/CFS may represent an identifiable and easily measurable behavioural marker of ME. This could, in conjunction with other diagnostic tests, help delineate it from other conditions."

The work was funded by ME Research UK who provided funding for a 1-year MPhil studentship, awarded to Rachel Wilson, who was supervised by Drs Claire Hutchinson and Kevin Paterson from the University of Leicester's Department of Neuroscience, Psychology and Behaviour.

Dr Neil Abbot, Research & Operations Director at ME Research UK, added: "Around three-quarters of people with ME/CFS report a range of eye and vision-related symptoms that interfere with their everyday lives, yet there has been very little scientific investigation of the problem.

"Dr Claire Hutchinson and her team have previously confirmed the existence of eye movement difficulties in ME/CFS patients, and that symptoms, including eye pain, can be severe. Her new report in Perception extends these findings and raises the possibility that vision anomalies, including pattern-related visual stress, may have a diagnostic role in the disease."

The objective of this study was to determine vulnerability to pattern-related visual stress in Myalgic Encephalomyelitis/Chronic Fatigue Syndrome (ME/CFS). A total of 20 ME/CFS patients and 20 matched (age, gender) controls were recruited to the study. Pattern-related visual stress was determined using the Pattern Glare Test. Participants viewed three patterns, the spatial frequencies (SF) of which were 0.3 (low-SF), 2.3 (mid-SF), and 9.4 (high-SF) cycles per degree (c/deg). They reported the number of distortions they experienced when viewing each pattern. ME/CFS patients exhibited significantly higher pattern glare scores than controls for the mid-SF pattern. Mid-high SF differences were also significantly higher in patients than controls. These findings provide evidence of altered visual perception in ME/CFS. Pattern-related visual stress may represent an identifiable clinical feature of ME/CFS that will prove useful in its diagnosis. However, further research is required to establish if these symptoms reflect ME/CFS-related changes in the functioning of sensory neural pathways.

Posted by Erica Verrillo at 8:23 AM