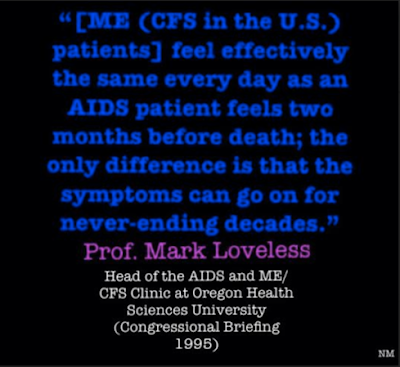 This petition was started by Noreen Murphy, an Irish ME patient. Currently, Ampligen is unavailable in Ireland.

As the oldest immune-modulating drug for ME, Ampligen has a long track record, and has benefited thousands of patients.


Make the drug Ampligen available for M.E. patients in Ireland

There are thousands of people with M.E. (Myalgic Encephalomyelitis) in Ireland. At the very best, we receive only symptom management from our doctors, that's the best they can do for us. There is a drug, Ampligen (Rintatolimod), for the treatment of M.E.

Ampligen has been successfully trialled in the U.S.A. for the last two decades. Many M.E. patients have gone into FULL REMISSION with this drug.

We are asking the Minister For Health to make Ampligen available to us.

M.E. is an neurological illness as defined by the WHO (World Health Organisation). It affects all systems: neurological, immune, endocrine, gastrointestinal, musculoskeletal, etc. The symptoms can vary from mild, moderate, severe to very severe. It can be remitting/relapsing or progressive. Some people spend their days in a darkened room, unable to tolerate light or sound. Some are tube-fed. Others are mildly affected.

My name is Noreen Murphy. I have M.E. for over 29 years. Initially, I was very severe, then moderate for a number of years but have Severe M.E. for past few years.

February 28
Ampligen should be available for those sickened by myalgic encephalomyelitis. It is a reasonable treatment option to try and a way to return some to normal life again.
February 23
Any drug that's deemed safe should be made available to people with this illness. The pain and suffering never stops, I know this as I care for my daughter who's been ill for 28 years since the age of nine.
February 18
Please make this drug available to MS sufferers. They deserve a better quality of life.
February 16
Petition has reached 500 signatures!
February 11
I have been on Ampligen on a cost-recovery, compassionate-care basis since 1999 (except for four years when I lost it); It made my immune biomarkers disappear and my viruses go dormant.. FDA has said in writing that there are no major toxicities. There are no other drugs specifically targeted to ME... show more
February 11
Petition has reached 100 signatures!
February 10
We are now live!

Posted by Erica Verrillo at 6:46 AM