Myalgic Encephalomyelitis: A Baffling Syndrome With a Tragic Aftermath by A. Melvin Ramsay 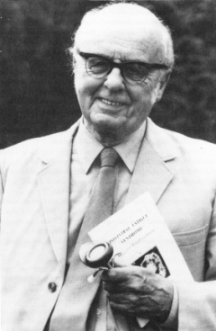 Dr. Melvin Ramsay was a consulting physician at the Infectious Diseases Department of the Royal Free Hospital when an epidemic of what he would later call myalgic encephalomyelitits struck over 200 members of the staff in 1955.

Like Drs. Peterson and Cheney during the Incline Village outbreak, Dr. Ramsay was convinced from the start that the Royal Free epidemic was caused by a pathogen, and that it was infectious. His meticulous observations, as well as decades of clinical experience, formed the basis for his book, Post-viral fatigue: The saga of the Royal Free Disease (reprinted by the MEAssociation).

Dr. Ramsay's understanding of the disease was profound. Many of the discoveries that were later to inform a new generation of ME physicians were presaged by Dr. Ramsay. In a letter published in the Postgraduate Medical Journal in 1978, Dr. Ramsay suggested that the muscle fatigability in ME patients might be due to mitochondrial impairment. He never doubted that the disease was primarily neurological. Nor did he underestimate its severity.

While there are many reasons to discard the trivializing name CFS in favor of ME, Ramsay's Disease has always been my preferred name for the illness that Dr. Ramsay so accurately described nearly 60 years ago.

Myalgic Encephalomyelitis: A Baffling Syndrome With a Tragic Aftermath


The syndrome which is currently known as Myalgic Encephalomyelitis in the UK and Epidemic Neuromyasthenia in the USA leaves a chronic aftermath of debility in a large number of cases. The degree of physical incapacity varies greatly, but the dominant clinical feature of profound fatigue is directly related to the length of time the patient persists in physical effort after its onset; put in another way, those patients who are given a period of enforced rest from the onset have the best prognosis.

Although the onset of the disease may be sudden and without apparent cause, as in those whose first intimation of illness is an alarming attack of acute vertigo, there is practically always a history of recent virus infection associated with upper respiratory tract symptoms though occasionally there is gastro-intestinal upset with nausea and vomiting. Instead of making a normal recovery, the patient is dogged by persistent profound fatigue accompanied by a medley of symptoms such as headache, attacks of giddiness, neck pain, muscle weakness, parasthesiae, frequency of micturition or retention, blurred vision and/or diplopia and a general sense of 'feeling awful'. Many patients report the occurrence of fainting attacks which abate after a small meal or even a biscuit, and in an outbreak in Finchley, London, in 1964 three patients were admitted to hospital in an unconscious state presumably as a result of acute hypoglycaemia. There is usually a low-grade pyrexia [fever] which quickly subsides. Respiratory symptoms such as sore throat tend to persist or recur at intervals. Routine physical examination and the ordinary run of laboratory investigations usually prove negative and the patient is then often referred for psychiatric opinion. In my experience this seldom proves helpful is often harmful; it is a fact that a few psychiatrists have referred the patient back with a note saying 'this patient's problem does not come within my field'. Nevertheless, by this time the unfortunate patient has acquired the label of 'neurosis' or 'personality disorder' and may be regarded by both doctor and relatives as a chronic nuisance. We have records of three patients in whom the disbelief of their doctors and relatives led to suicide; one of these was a young man of 22 years of age.

The too facile assumption that such an entity - despite a long series of cases extending over several decades - can be attributed to psychological stress is simply untenable. Although the aetiological factor or factors have yet to be established, there are good grounds for postulating that persistent virus infection could be responsible. It is fully accepted that viruses such as herpes simplex and varicella-zoster remain in the tissues from the time of the initial invasion and can be isolated from nerve ganglia post-mortem; to these may be added measles virus, the persistence of which is responsible for subacute sclerosing panencephalitis that may appear several years after the attack and there is a considerable body of circumstantial evidence associating the virus with multiple sclerosis. There should surely be no difficulty in considering the possibility that other viruses may also persist in the tissues. In recent years routine antibody tests on patients suffering from myalgic encephalomyelitis have shown raised titres to Cocksackie B Group viruses. It is fully established that these viruses are the aetiological agents of 'Epidemic Myalgia' or 'Bornholm's Disease' and that, together with ECHO viruses, they comprise the commonest known virus invaders of the central nervous system. This must not be taken to imply that Cocksackie viruses are the sole agents of myalgic encephalomyelitis since any generalised virus infection may be followed by a period of post-viral debility. Indeed, the particular invading microbial agent is probably not the most important factor. Recent work suggests that the key to the problem is likely to be found in the abnormal immunological response of the patient to the organism.

A second group of clinical features found in patients suffering from myalgic encephalomyelitis would seem to indicate circulatory disorder. Practically without exception they complain of coldness in the extremities and many are found to have abnormally low temperatures of 94 or 95 degrees F. In a few, these are accompanied by bouts of severe sweating even to the extent of waking during the night lying in a pool of water. A ghostly facial pallor is a well known phenomenon and this has often been detected by relatives some 30 minutes before the patient complains of being ill.

The third component of the diagnostic triad of myalgic encephalomyelitis relates to cerebral activity. Impairment of memory and inability to concentrate are features in every case. Many report difficulty in saying the right word and are conscious of the fact that they continue to say the wrong one, for example 'cold' when they mean 'hot'. Others find that they start a sentence but cannot complete it, while some others have difficulty comprehending the written or spoken word. A complaint of acute hyperacusis is not infrequent; this can be quite intolerable but alternates with periods of normal hearing or actual deafness. Vivid dreams generally in colour are reported by persons with no previous experience of such a phenomenon. Emotional lability is often a feature in a person of previous stable personality, while sudden bouts of uncontrollable weeping may occur. Impairment of judgement and insight in severe cases completes the 'encephalitic' component of the syndrome.

I would like to suggest that in all patients suffering from chronic debility for which a satisfactory explanation is not forthcoming a renewed and much closer appraisal of their symptoms should be made. This applies particularly to the dominant clinical feature of profound fatigue. While it is true that there is considerable variation in degree from one day to the next or from one time of the day to another, nevertheless in those patients whose dynamic or conscientious temperaments urge them to continue effort despite profound malaise or in those who, on the false assumption of 'neurosis', have been exhorted to 'snap out of it' and 'take plenty of excercise' the condition finally results in a state of constant exhaustion. This has been amply borne out by a series of painstaking and meticulous studies carried out by a consultant in physical medicine, himself an ME sufferer for 25 years. These show clearly that recovery of muscle power after exertion is unduly prolonged. After moderate excercise, from which a normal person would recover with nothing more than a good night's rest, an ME patient will require at least 2 to 3 days while after more strenuous excercise the period can be prolonged to 2 or 3 weeks or more. Moreover, if during this recovery phase, there is a further expenditure of energy the effect is cumulative and this is responsible for the unrelieved sense of exhaustion and depression which characterises the chronic case. The greatest degree of muscle weakness is likely to be found in those muscles which are most in use; thus in right- handed persons the muscles of the left hand and arm are found to be stronger than those on the right. Muscle weakness is almost certainly responsible for the delay in accommodation which gives rise to blurred vision and for the characteristic feature of all chronic cases, namely a proneness to drop articles altogether with clumsiness in performing quite simple manoeuvres; the constant dribbling of saliva which is also a feature of chronic cases is due to weakness of the masseter muscles. In some cases, the myalgic element is obvious but in others a careful palpitation of all muscles will often reveal unsuspected minute foci of acute tenderness; these are to be found particularly in the trapezii, gastrocnemii and abdominal rectii muscles.

The clinical picture of myalgic encephalomyelitis has much in common with that of multiple sclerosis but, unlike the latter, the disease is not progressive and the prognosis should therefore be relatively good. However, this is largely dependent on the management of the patient in the early stages of the illness. Those who are given complete rest from the onset do well and this was illustrated by the aforementioned three patients admitted to hospital in an unconscious state; all three recovered completely. Those whose circumstances make adequate rest periods impossible are at a distinct disadvantage, but no effort should be spared to give them the all-essential basis for successful treatment. Since the limitations which the disease imposes vary considerably from case to case, the responsibility for determining these rests upon the patient. Once these are ascertained the patient is advised to fashion a pattern of living that comes well within them. Any excessive physical or mental stress is likely to precipitate a relapse.


It can be said that a long-term research project into the cause of this disease has been launched and there are good grounds for believing that this will demonstrate beyond doubt that this condition is organically determined.
Posted by Erica Verrillo at 2:02 PM