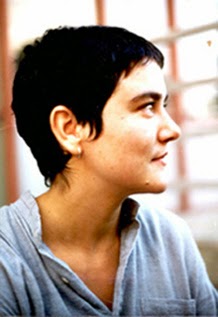 August 8 is the birthday of Sophia Mirza, a British woman who died of ME at the age of 32.

Sophia contracted ME in 1999 after a "flu."  She never recovered her health, and by June 2000 was bedbound. Like many patients with severe ME, Sophia could not tolerate light, touch, or sound. She developed sensitivities to foods, and was unable to read, write, or even bathe herself. In response to her mother Criona's request for help, Sophia's GP, Dr. Firth, suggested that Sophia had made herself ill so she could "get attention."

Over the course of the next three years, Criona's attempts to have her daughter treated for ME were repeatedly thwarted. Dr. Firth referred Sophia to a psychiatrist, Dr. Baginski, who recommended a clinic that supposedly treated ME. When Sophia discovered that the treatment consisted of Graded Exercise Therapy, she declined.

At that point, the physicians involved with Sophia's case began to threaten Criona.


"I was told that if Sophia refused to go to Oldchurch Hospital in Romford, or if she did not recover within the following 6 months, that she would be sectioned under the Mental Health Act, then added that if I tried to stop this, then he, Dr. Baginski, would go to the courts to have me removed as the nearest relative. Furthermore, if I did not open the door when they would come to take Sophia away, that the police would be called to “smash the door down”. When I asked how much better Sophia would get by these proposed actions, the reply was given that it was “none of your business, that it was for the courts to decide”. The psychiatrist wanted to arrange for me to see a psychologist so that I could understand the good, that he, Dr. Baginski, was doing to Sophia. I refused." (Sophia and ME)

In July 2003, Dr. Baginski made good on his threat. The police smashed down the door and took Sophia to a local mental hospital, where she was placed in a locked room within a locked ward. During the weeks she was confined to the mental ward, Sophia did not receive even the most basic care. Her sheets were not changed, her blood pressure was not taken; she was never washed, and her bathroom was never cleaned. By the time Sophia was  released, the damage had been done. Sophia descended into a "hell-hole" from which she never recovered.

On November 25, 2005, Sophia Mirza died. The official cause of death was listed as acute aneuric renal failure (failure to produce urine) due to dehydration as a result of Chronic Fatigue Syndrome. A subsequent autopsy revealed that 80 % of the dorsal root ganglia of Sophia's spine were damaged. (This is consistent with active herpes infection.) The dorsal root ganglia are responsible for conveying sensory information to the brain, so damage to the ganglia would produce pain, sensitivity to sound, light, touch - all the hallmark symptoms of severe ME.

Sadly, Sophia's case is not unique. Many patients diagnosed with ME or CFS are not only labeled as psychiatric cases, but are forcibly removed from their families to undergo "treatments" that only make them worse.

In 1986, Ean Proctor, a 12-year-old boy living on the Isle of Man, fell ill with severe ME. By 1988 he was confined to a wheelchair and could no longer speak. In spite of his diagnosis of ME, Ean was removed from his home after Dr. Simon Wessely decided that Ean was mentally ill. He was taken to a psychiatric ward in a hospital, where the staff told the boy that his parents were" letting him die." Because they did not believe he was unable to get out of his wheelchair, they let him soil himself rather than take him to the bathroom. Then they pushed him into a swimming pool, in the belief that he was faking his paralysis. Ean promptly sank to the bottom. After five months of legal battles, the Proctors finally got their son back, but not until they had nearly bankrupted themselves with legal costs.

Karina Hansen, a Danish woman, is still locked in a mental ward in Denmark. After more than a year of "treatment" her health is worsening, but the state will not release her, in spite of concerted national and international efforts.

David, a German boy who was struck with severe ME at the age of 15, was taken to a mental ward after his physician determined that his sensitivities to noise and light were psychogenic. At the clinic, he was forced to exercise. David was "traumatised" by the experience, and never recovered. At age 17 David died of a brain hemorrhage.

And on the home front, the recent case of Justina Pelletier's incarceration in a mental ward made national news. Her physical deterioration while locked in the ward could be documented, because the press got involved. Justina became a cause célèbre, to the point that two Congressmen have introduced a law that would prevent medical experimentation on children in hospitals.

These cases, while striking, are not isolated. How many ill children - and adults - have been stuck away in locked mental wards, to be abused, drugged, and ignored? And how many people have died, after years of medical neglect, from complications due to their illnesses?

When doctors are unable to make a diagnosis they almost always place the blame on their patients. Perhaps in a society in which doctors were less arrogant, this would not be the case. But in our society - which has given almost god-like status to physicians - if a patient does not get well, it is because the patient does not want to get well. The subsequent psychiatric diagnoses saddled on these patients are numerous - somatoform disorder, factious disorder, Munchausen's - but they all amount to "I cannot figure out how to fix you, therefore you are to blame."

Once people are branded with a psychiatric disorder, they cease to be human beings. Their civil and legal rights are revoked, and they can expect no compassion. Psychiatric patients are isolated from friends and family, who are almost universally considered "enablers." They are drugged into a state of compliance. And rather than attend to their needs, which are considered part of their "illness," staff members can, on doctor's orders, legitimately engage in active abuse, which is justified by relabeling it as "therapy."

Cases like Sophia's, or Ean's, or Karina's, or David's, or Justina's raise some very important questions, one of which is "Should anybody, under any circumstances, be treated like that?"

Another question is "Who decides what is real?" What special training qualifies social workers, school nurses, and petty bureaucrats to determine what is and is not real? For that matter, which course in medical school trains physicians in the finer points of reality?

Sophia's decline can be directly attributed to active medical neglect. But as long anyone in an official capacity is allowed to make the determination of what is real and what isn't, the physicians and bureaucrats responsible for contributing to Sophia's demise will never be held accountable.

Who Decides What is Real?

The idea that an illness is not "real" arises from the concept that people whose illnesses cannot be easily diagnosed by physicians must be faking it. There is an inherent problem with this line of reasoning.

With a few exceptions, mental illnesses are "all in your head." There is no identifiable physical cause for the majority of them. They cannot be confirmed by a medical test, and there is no cure. The treatments are, at best, palliative, and, at worst, fatal.

Yet, insurance companies pay for treatments for mental illness. Why do they spend money on illnesses that are imaginary? And why do therapists have a 991-page manual describing these "not real" illnesses? If all one has to do is convince the patient that he or she does not have a real illness, why are there hospitals, clinics, hefty fees, and a pharmaceutical industry built around these illnesses?

Furthermore, if these illnesses are "all in your head" then why aren't evil eye and spirit possession included in the DSM V as well? If physicians actually believe that physical symptoms can somehow be created by the mind, why isn't there a diagnostic code for voodoo? Are there levels of unreality in which some unreal illnesses are more unreal than others?

Even more bizarre is the notion that if you believe that you have an organic (real) illness, but the doctor can't find a test to confirm it, then your belief that your illness is organic proves that it isn't.

That brings us back to Sophia Mirza. Sophia was diagnosed with ME, a neurological illness her doctors did not believe was "real." Eventually, Sophia's "unreal" illness killed her. Her autopsy revealed that there had been a real problem all along. Yet nearly ten years after Sophia's death, doctors still don't believe in the reality of ME/CFS. Nor will they ever as long as cultural myopia is permitted as an acceptable basis for medical opinion.

Posted by Erica Verrillo at 8:30 AM