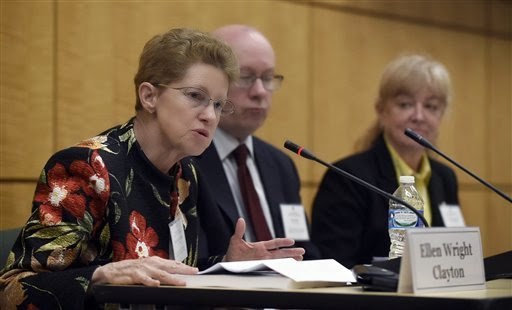 In September 2013, the IOM was contracted by HHS to devise a new definition for chronic fatigue syndrome (CFS), the current CDC definition being considered too broad. It was also charged with providing a new name at its discretion.

The IOM made its recommendations on Tuesday, February 10, 2015 in a report entitled, "Beyond Myalgic Encephalomyelitis/Chronic Fatigue Syndrome: Redefining an Illness.”

One of the recommendations of the report was to eliminate CFS and to replace it, as well as myalgic encephalomyelitis, with "systemic exertion intolerance disease" (SEID).

The overall response to the new name has been negative. Patients don't like it for various reasons, and even Simon Wessely thought SEID might "add to the confusion." In the aftermath of the IOM's announcement, Leonard Jason was contacted by hundreds of outraged patients, which prompted him to write a blog post calling for greater collaboration between patients, ME/CFS physicians and government agencies, so that "all parties are involved in the decision-making process."

The prompt to gather feedback has generated several polls and surveys on the new name, sponsored by Health Rising, Paradigm Change, the ME Association, and ProHealth, among others.

In all of these surveys and polls, ME has been the name of choice. 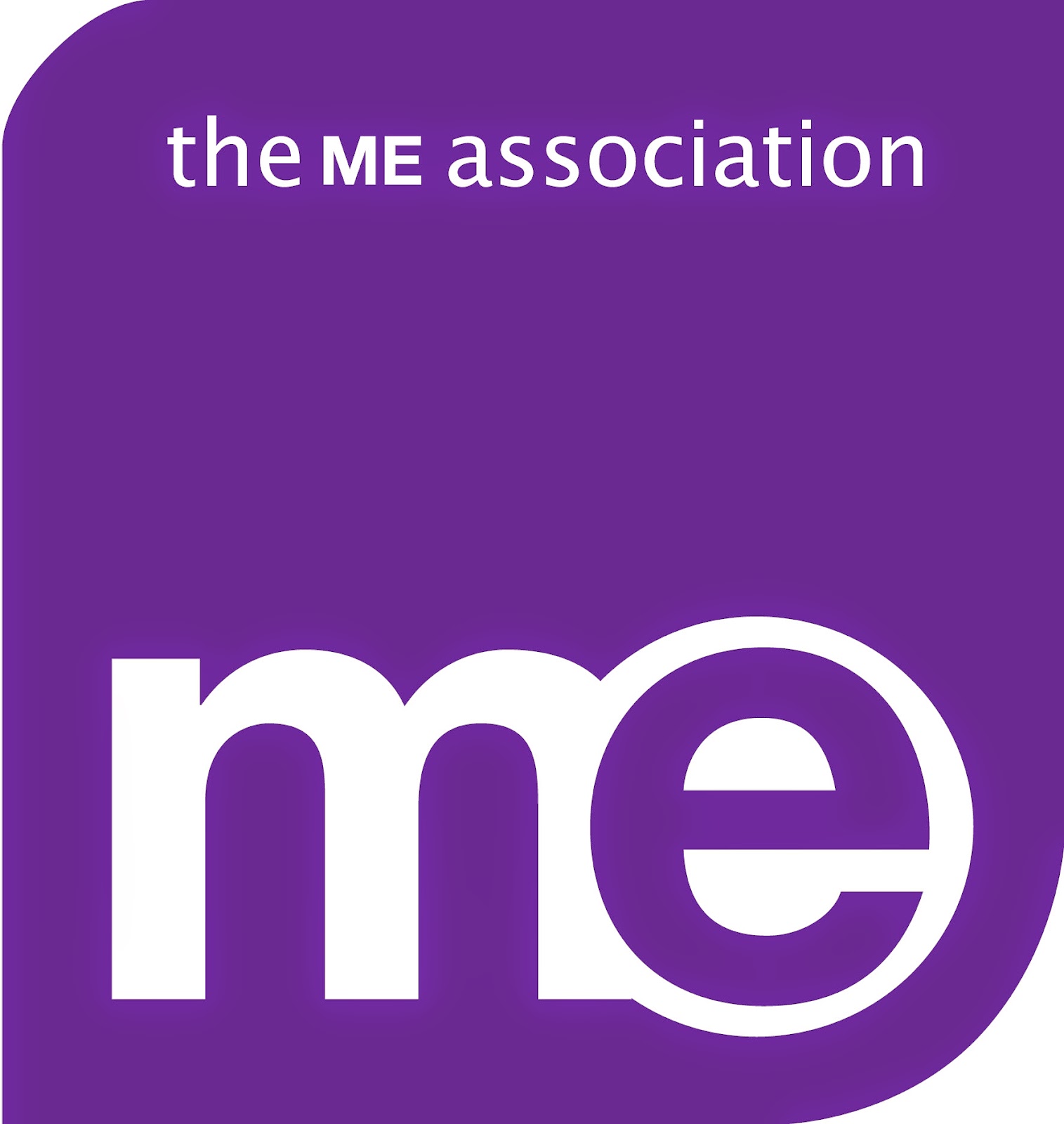 The ME Association in the UK conducted a poll which had a total of 724 respondents. In answer to the question, "Should CFS and/or ME be renamed Systemic Exertion Intolerance Disease (SEID) as recommended in the U.S. Institute of Medicine Report?" the majority answered with an emphatic "no." This is not surprising given the historical use of ME in the UK.

But while most did not like SEID, there were mixed responses from among the remaining 38%, indicating that a significant number of people are not happy with having two names (ME and CFS) for the disease. 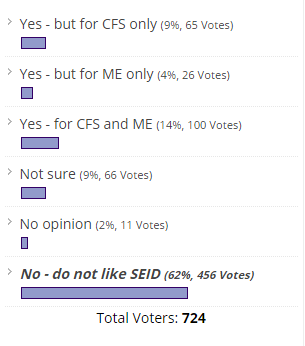 In February, Cort Johnson conducted a poll in which respondents were asked to rank different names for ME/CFS. A total of 550 people took the initial poll.

When asked to rank their favorite names from first to last, ME was the preferred name. SEID was the least preferred.


In a second survey, Neuroendocrineimmune Disease was added to the list. It proved nearly as popular as ME, but once again SEID came in last.

On February 26, 2015, ProHealth conducted a poll on the proposed new name for ME/CFS: “What name would YOU choose for CFS? Take the poll!”

A total of 3059 people filled out the survey, making it the largest survey on the proposed name change. Of those, 2690 respondents reported having either ME or CFS. Of those who did not have either diagnosis, most had a family member with the disease, or had been diagnosed with FM.

The majority of respondents (75%) thought that CFS needed to be replaced. The primary reasons given were that the name was trivializing and did not capture the scope or seriousness of the illness. The 25% of respondents who did not agree that a new name was needed gave familiarity, ease of pronunciation, and accuracy as reasons to keep CFS.

The name which garnered the most support was myalgic encephalomyelitis (781 votes). The reasons given were historical continuity, accuracy, and medical weight. SEID got 309 votes. The reasons given were accuracy, and inevitability ("It's too late now to do anything about it"). 179 people wanted to keep the current name ME/CFS for reasons of accuracy and continuity. Aside from Ramsay's Disease, the remaining names garnered very few votes. Those who commented on the choice of the remaining names mentioned that they did not know who Cheney or Peterson were (or Ramsay) and that they had no awareness of the significance of Incline Village or how Nightingale might be associated with the illness.

Respondents had a great deal to say about the name change. The survey garnered 146 pages of additional comments, the majority of which were critical of both CFS and SEID as appropriate names for the disease. Some of the critical comments of the proposed name SEID are as follows:


"People are going to make jokes about the name systemic exertion intolerance disease."

"NOT SEID, which is an even worse name than CFS." (7 people made a similar statement.)

"Not SEID. Too much negative stigma." (31 people made a similar statement.)

"Until they are able to specify exactly what disease people are suffering from, it would be prudent to stick with ME which most people are familiar with." (12 people made a similar statement.)

"CFS is an appalling name, as is SEID. It is associated with being lazy and nothing could be more untrue. Stick with ME - we all know what this is and can easily identify with the name." (13 people made a similar statement.)

"I would have great difficulty in remembering what it is that SEID actually stands for. It is so much more than "exercise intolerance."

"I suffer from severe pain all over my body and this is not as a result of "exercise." (7 people made a similar statement.)

"I don't like the Exertion Intolerance. I think it continues the trivialization of this terrible illness." (13 people made a similar statement.)

"It still points to a symptom, doesn't capture the broader impact." (14 people made a similar statement.)

"Changing the name to SEID is just going cause more confusion." (37 people made a similar statement.)

"Systemic Exertion Intolerance Disease (SEID) sounds like a rubbish name to me. It does not sound as if it relates to the total exhaustion, massive joint instability, massive gut problems, massive migraines and vomiting, massive whole body disturbances. It is altogether too polite and meaningless."

“Intolerance" in the SEID name is worse than "fatigue" as most people have "intolerances." This word cannot be taken seriously."

"Exertion intolerance runs risk of being dismissed as work shy or lazy."

"SEID is a poor choice. ANY of the above would be preferable."

"Sounds like we're allergic to exercise or would be perfectly well if we handled stress better."

"SEID is arguably worse than Fukuda (apart from getting rid of the name, CFS), as it leaves out viral symptoms like swollen or tender lymph glands and viral and muscle (peripheral) symptoms. No mention of acute viral onset either. Moving further away from ME and even getting rid of Lake Tahoe type outbreaks, which was additional evidence. I'm concerned that SEID could replace ME. This is yet more political (and insurance industry) interference and attempt to put away links to the original entity." (9 people made a similar statement.)

"The new name seemed to come randomly out of nowhere. And like the earlier names, it doesn't encapsulate the entire experience of this illness. If they can't do that, then just stick with the names people know. All this name effort might be better invested in understanding the disease and needed treatments."

"SEID is worse. Way too confusing." (19 people made a similar comment.)

"My fatigue is NOT just with exertion."

"ME isn't great but at least it sounds serious, and is what the rest of the world calls the disease. The new name is so awkward, no one will ever use it - CFS will continue to be what the disease will be called."

"I question and suspect Insurance Companies not wanting to cover medical bills as well as disability claims are trying to make the Syndromes even more confusing with less credibility."

Several people made the comment that: "It is a mistake to change the name prior to acquiring enough hard data on its pathophysiology through validated studies."


Some other name suggestions were:
It is very clear from the 1,244 additional comments that patients with this illness have strong concerns, not just about the name change, but about the lack of funding, the lack of recognition, and the lack of patient care.

The full results of the ProHealth survey were sent to the IOM, HHS Secretary Burwell, and ORWH Deputy Director Susan Maier.

A joint survey conducted by Paradigm Change and ME Advocacy asked a total of 1,147 people about a possible name change for the disease. The results were analyzed in a 526-page report which can be downloaded from Paradigm Change as a PDF file.

As with previous surveys, the preferred name was ME. Neuroendocrineimmune Disease came in second, as it did in Health Rising's second survey. 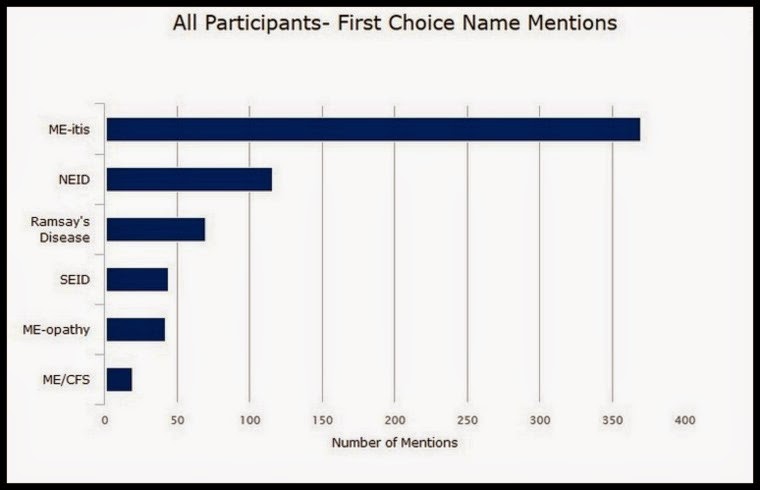 The Paradigm Change survey broadened its scope by asking for reactions to both the name and the process. The majority of respondents thought that the name SEID was either very bad or pretty bad, and 46% thought the IOM had failed to produce a legitimate name. 72% of respondents said that if the government started using SEID without input from patients, they would find it unacceptable. 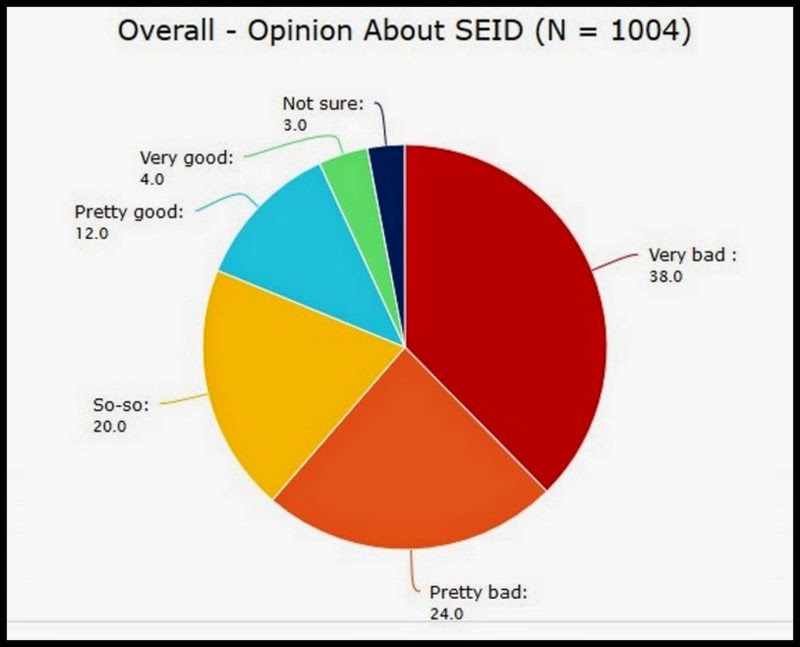 In addition to garnering responses to the name, this survey asked respondents about the IOM process itself. More than three-quarters (76%) thought that patients need to have more input ability in the naming process, and that the IOM had not allowed for sufficient input. About half of the participants (51%) said that they felt angry about the naming process.

The survey results were sent to HHS secretary Sylvia Burwell; to the heads of the NIH and CDC; to CFSAC members; to the IOM panel chair; to the NIH P2P committee; and to clinicians and researchers focusing on the disease.

In sum, it is clear from these surveys that the people whom the new name will most affect - patients, as well as researchers and ME/CFS specialists - have been entirely left out of the process of devising a name for this illness. It is also clear that the preferred name - on both sides of the Atlantic - is myalgic encephalomyelitis. Regardless of the IOM's opinion that brain inflammation is not yet proven be part of the illness, or their belief that pain is "nonspecific," there are historical reasons for choosing ME.

It is more than likely that the decision to abandon ME was not primarily based on medical reasons - as there are numerous illnesses whose names have been assigned by history - but on politics.

ME is associated with outbreaks. One of the forces that drives decisions made by HHS, as well as most state health agencies, is downplaying epidemics. AIDS and Lyme are cases in point. Both of these epidemics - one with a human vector, and one transmitted by ticks - were ignored until they became too big to sweep under the rug. Sadly, the agencies that are supposed to be responsible for protecting public health have consistently used the same tactic with ME.

Ultimately, SEID needs to be rejected not only because it is an inadequate name that does a disservice to people who must bear it, but because through inventing yet another name it denies one of the fundamental aspects of the disease, which is its history of outbreaks.

Posted by Erica Verrillo at 4:42 AM