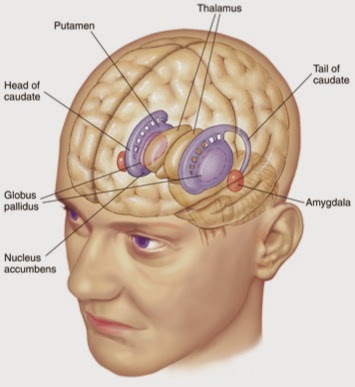 This study by Andrew Miller (see below) builds on previous work by Chaudhuri (Chaudhuri and Behan, 2000, Chaudhuri et al., 2003) and by Unger et al. (2012) linking fatigue to the basal ganglia in patients with ME/CFS.

The basal ganglia are a collection of nuclei found on both sides of the thalamus, outside and above the limbic system. Among other things, the basal ganglia control automatic coordinated activity (such as riding a bike or walking), eye movements, and reward circuits. Damage to this area would not only produce fatigue, but would account for the nystagmus (quick involuntary eye movements) as well as difficulty walking found in so many ME/CFS patients.
_____________________________

Compared with healthy controls, patients with chronic fatigue syndrome had less activation of the basal ganglia, as measured by fMRI (functional magnetic resonance imaging). This reduction of basal ganglia activity was also linked with the severity of fatigue symptoms.

According to the Centers for Disease Control and Prevention, chronic fatigue syndrome is a debilitating and complex disorder characterized by intense fatigue that is not improved by bed rest and that may be worsened by exercise or mental stress.

The results are scheduled for publication in the journal PLOS One.

"We chose the basal ganglia because they are primary targets of inflammation in the brain," says lead author Andrew Miller, MD. "Results from a number of previous studies suggest that increased inflammation may be a contributing factor to fatigue in CFS patients, and may even be the cause in some patients."

The basal ganglia are structures deep within the brain, thought to be responsible for control of movements and responses to rewards as well as cognitive functions. Several neurological disorders involve dysfunction of the basal ganglia, including Parkinson's disease and Huntington's disease, for example.

In previous published studies by Emory researchers, people taking interferon alpha as a treatment for hepatitis C, which can induce severe fatigue, also show reduced activity in the basal ganglia. Interferon alpha is a protein naturally produced by the body, as part of the inflammatory response to viral infection. Inflammation has also been linked to fatigue in other groups such as breast cancer survivors.

"A number of previous studies have suggested that responses to viruses may underlie some cases of CFS," Miller says. "Our data supports the idea that the body's immune response to viruses could be associated with fatigue by affecting the brain through inflammation. We are continuing to study how inflammation affects the basal ganglia and what effects that has on other brain regions and brain function. These future studies could help inform new treatments."

Treatment implications might include the potential utility of medications to alter the body's immune response by blocking inflammation, or providing drugs that enhance basal ganglia function, he says.

The researchers compared 18 patients diagnosed with chronic fatigue syndrome with 41 healthy volunteers. The 18 patients were recruited [not referred] based on an initial telephone survey followed by extensive clinical evaluations. The clinical evaluations, which came in two phases, were completed by hundreds of Georgia residents. People with major depression or who were taking antidepressants were excluded from the imaging study, although those with anxiety disorders were not.

For the brain imaging portion of the study, participants were told they'd win a dollar if they correctly guessed whether a preselected card was red or black. After they made a guess, the color of the card was revealed, and at that point researchers measured blood flow to the basal ganglia.

The key measurement was: how big is the difference in activity between a win or a loss?


Participants' scores on a survey gauging their levels of fatigue were tied to the difference in basal ganglia activity between winning and losing. Those with the most fatigue had the smallest changes, especially in the right caudate and the right globus pallidus, both parts of the basal ganglia.

Ongoing studies at Emory are further investigating the impact of inflammation on the basal ganglia, including studies using anti-inflammatory treatments to reduce fatigue and loss of motivation in patients with depression and other disorders with inflammation including cancer.
Posted by Erica Verrillo at 8:03 AM