May 12th, 2014 - Reports from the San Francisco and Washington, DC Demos 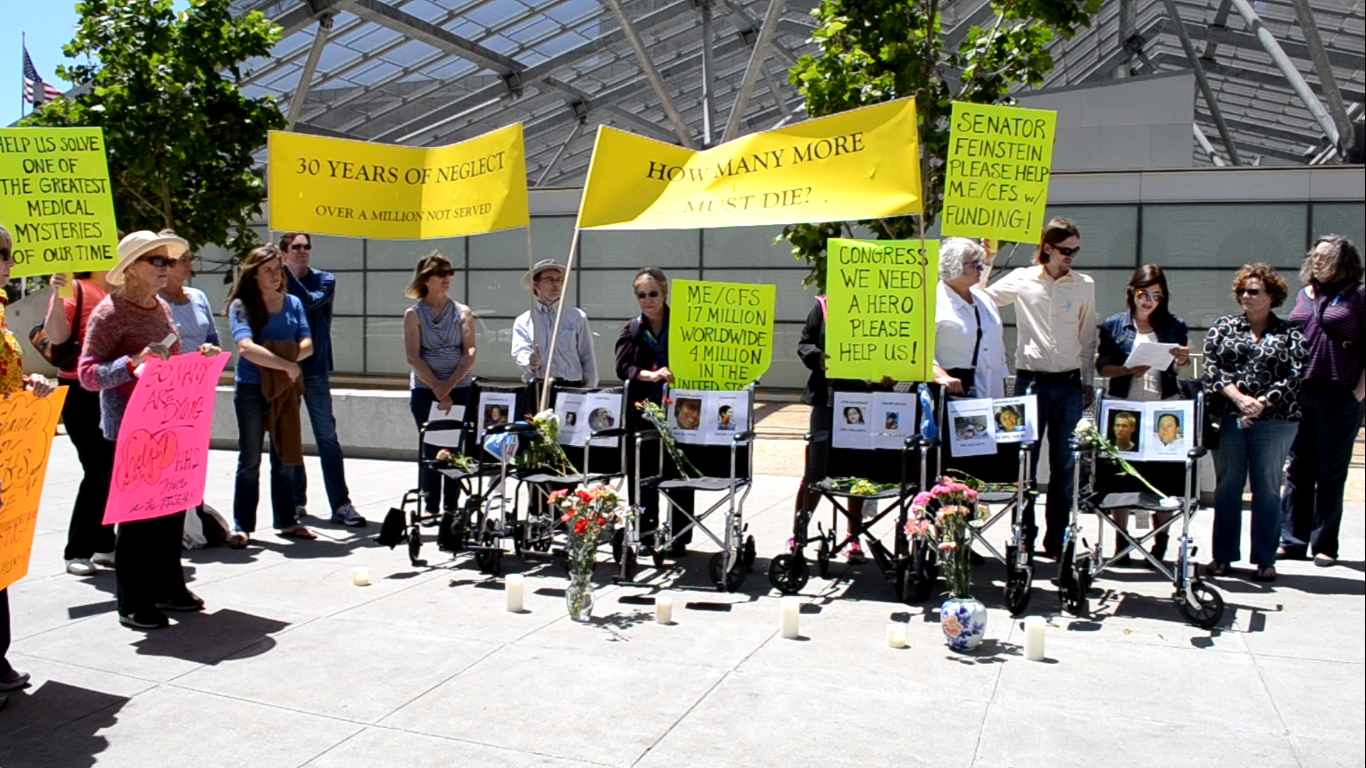 May 12th was an unusually hot day. But that did not deter seventeen demonstrators - patients, friends, and supporters -  from gathering in front of the Federal Building on Seventh Street in San Francisco, where the regional HHS office is headquartered. 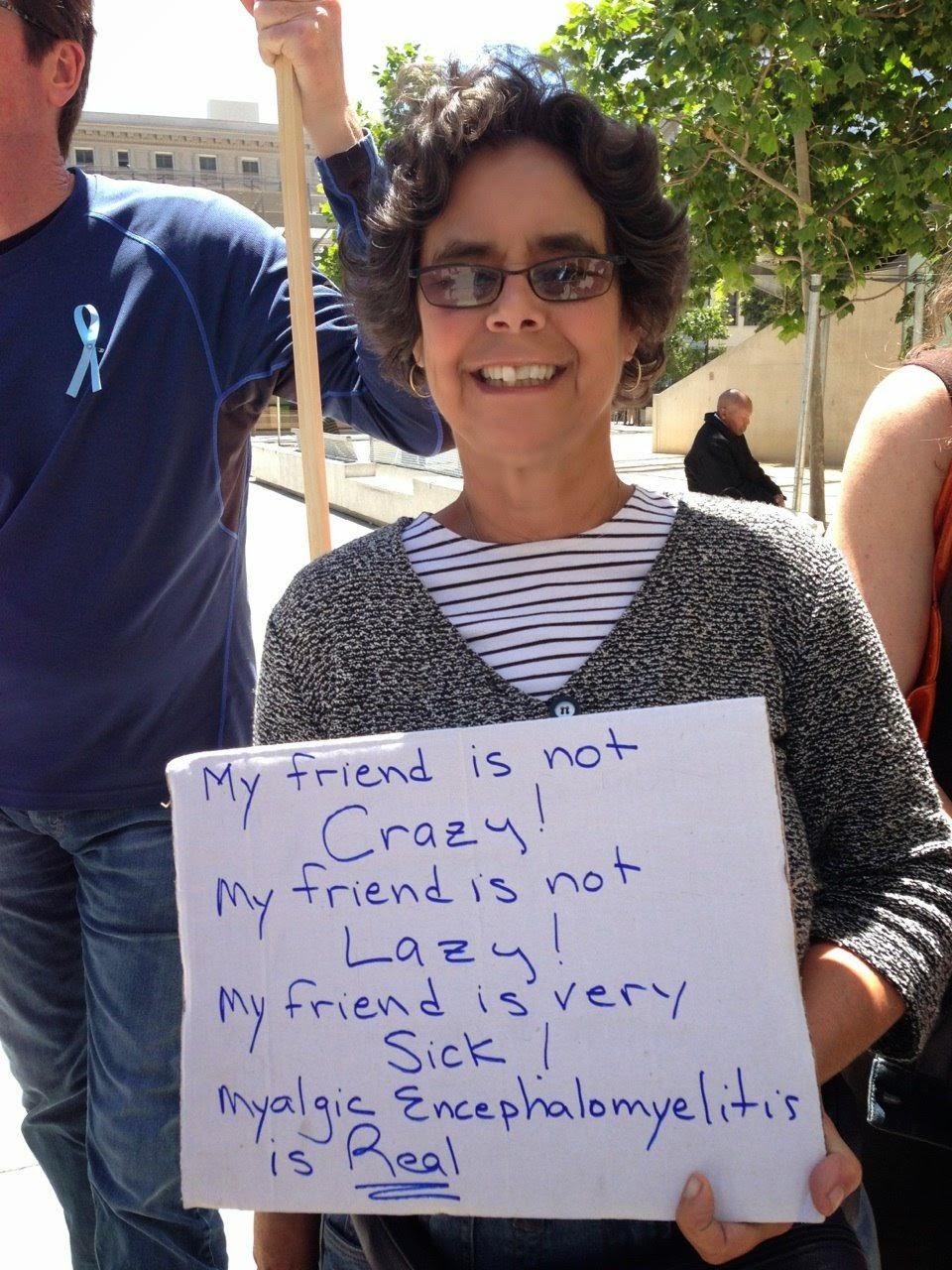 The demonstration was scheduled to begin at noon, and within a few minutes of arriving, the group had set up six wheelchairs, erected banners, held up signs, arranged flowers, and displayed the photos of 11 people whose lives had been taken by ME. Susan Kreutzer passed out blue ribbons that she had made herself, and we pinned them to our clothing.

Nobody needed to be told what to do. The entire group acted in concert, with a smooth efficiency that belied the fact that most of us were strangers to one another.

After a short introductory speech, six of the demonstrators lined up behind the wheelchairs and read aloud the obituaries of those whose portraits were displayed. 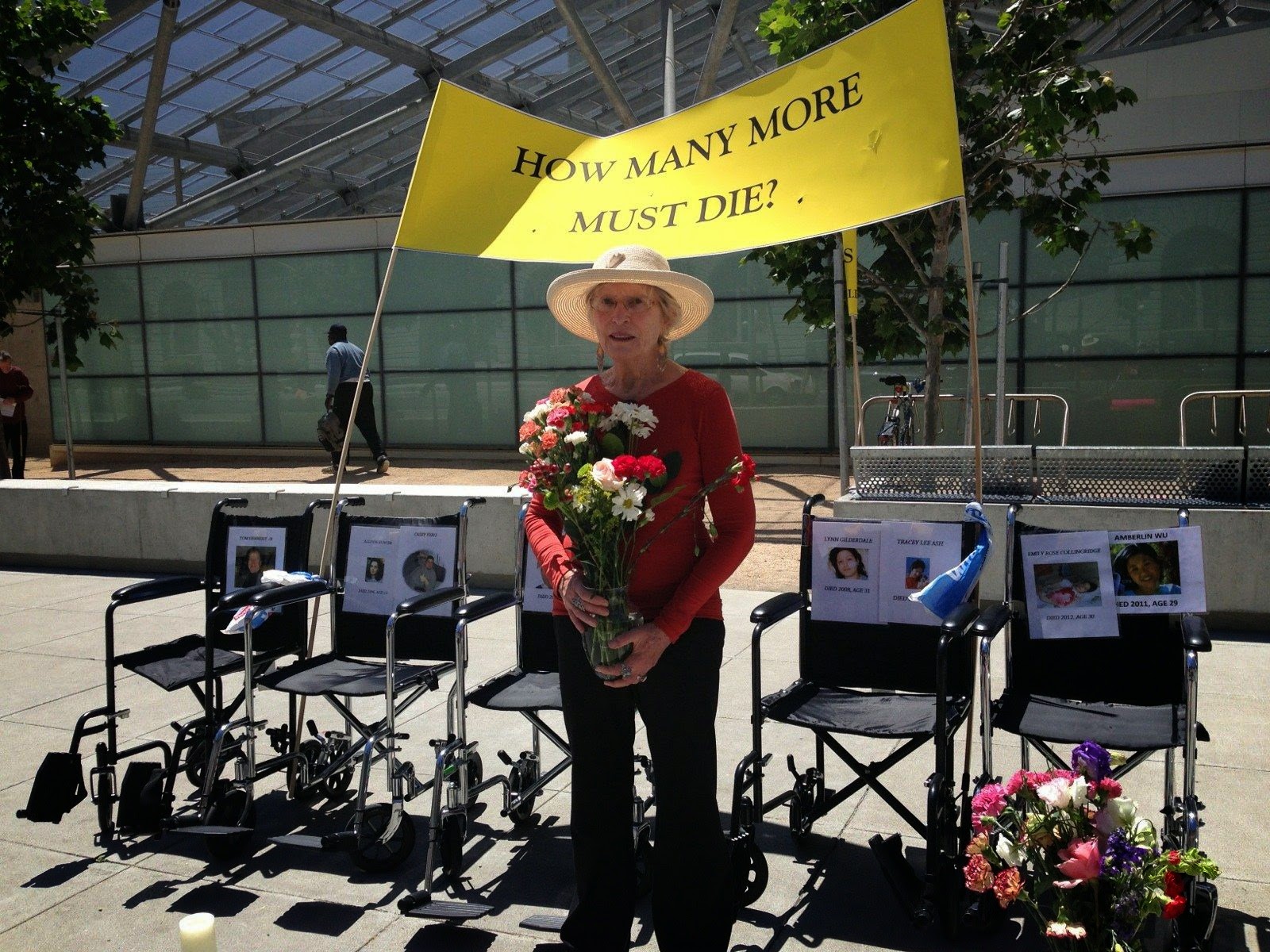 While the obituaries were being read, the group stood quietly, listening in silence as the too short lives of these brave individuals were read. The youngest was David, age 17. The oldest was Tom Hennessy, 49, founder of May 12 International ME/CFS Awareness Day and a fierce advocate for patient rights. Tom's picture was displayed in the first wheelchair by itself. Also shown were photos of Allison Hunter (19), Lynn Gilderdale (31), Patrick Kelly (42), Casey Fero (23), Eric Moore (46), Amberlin Wu (29), Sophia Mirza (32), Emily Rose Collingridge (30), and Tracey Ash (26). 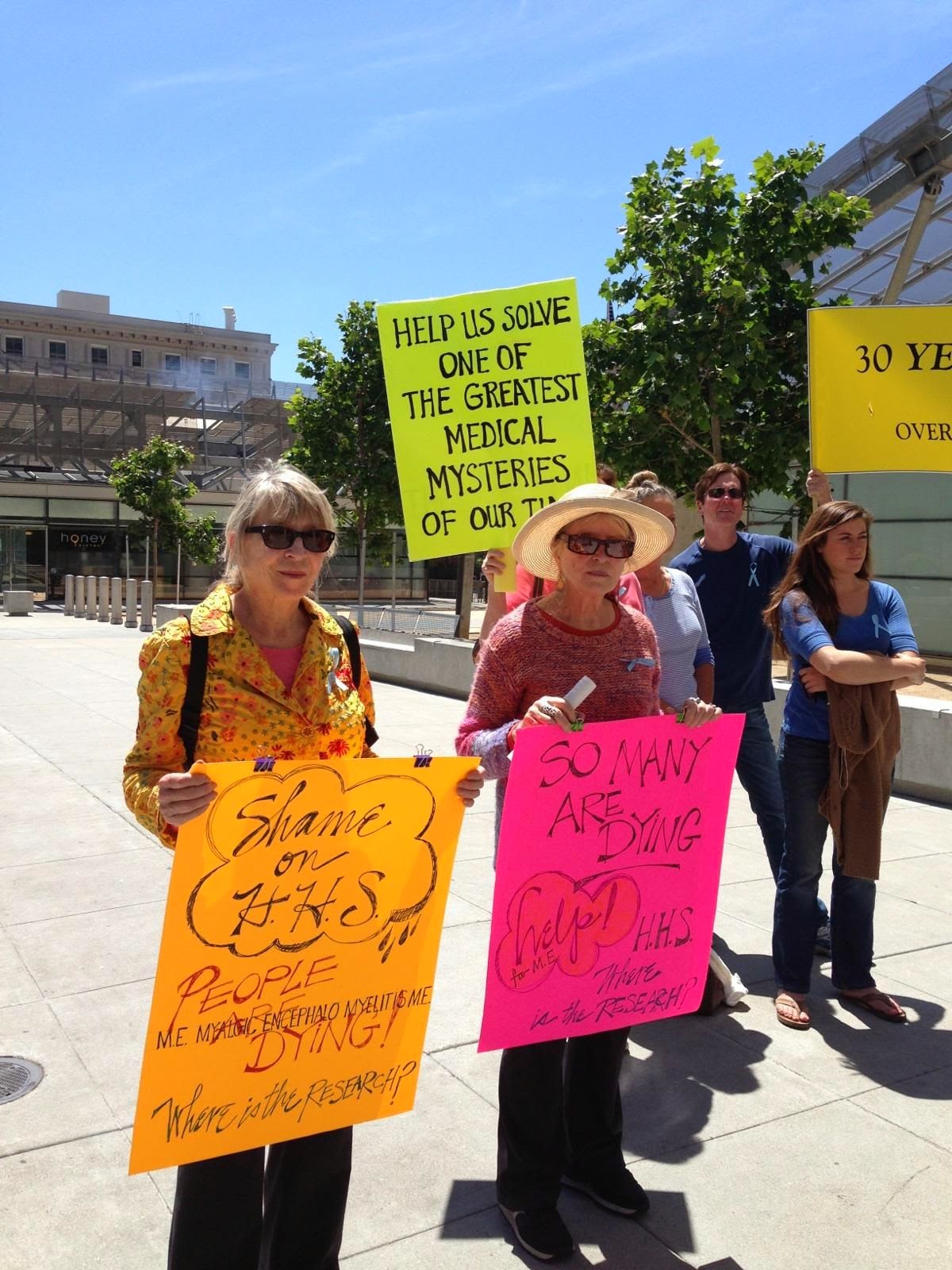 Afterwards, I entered the Federal Building with Jane Pannell to deliver two petitions demanding the cancellation of the IOM contract and the immediate adoption of the Canadian Consensus Criteria for ME. The petitions, totaling nearly 10,000 signatures, were given to HHS and to Nancy Pelosi's office, where I spoke with her long-time aide. 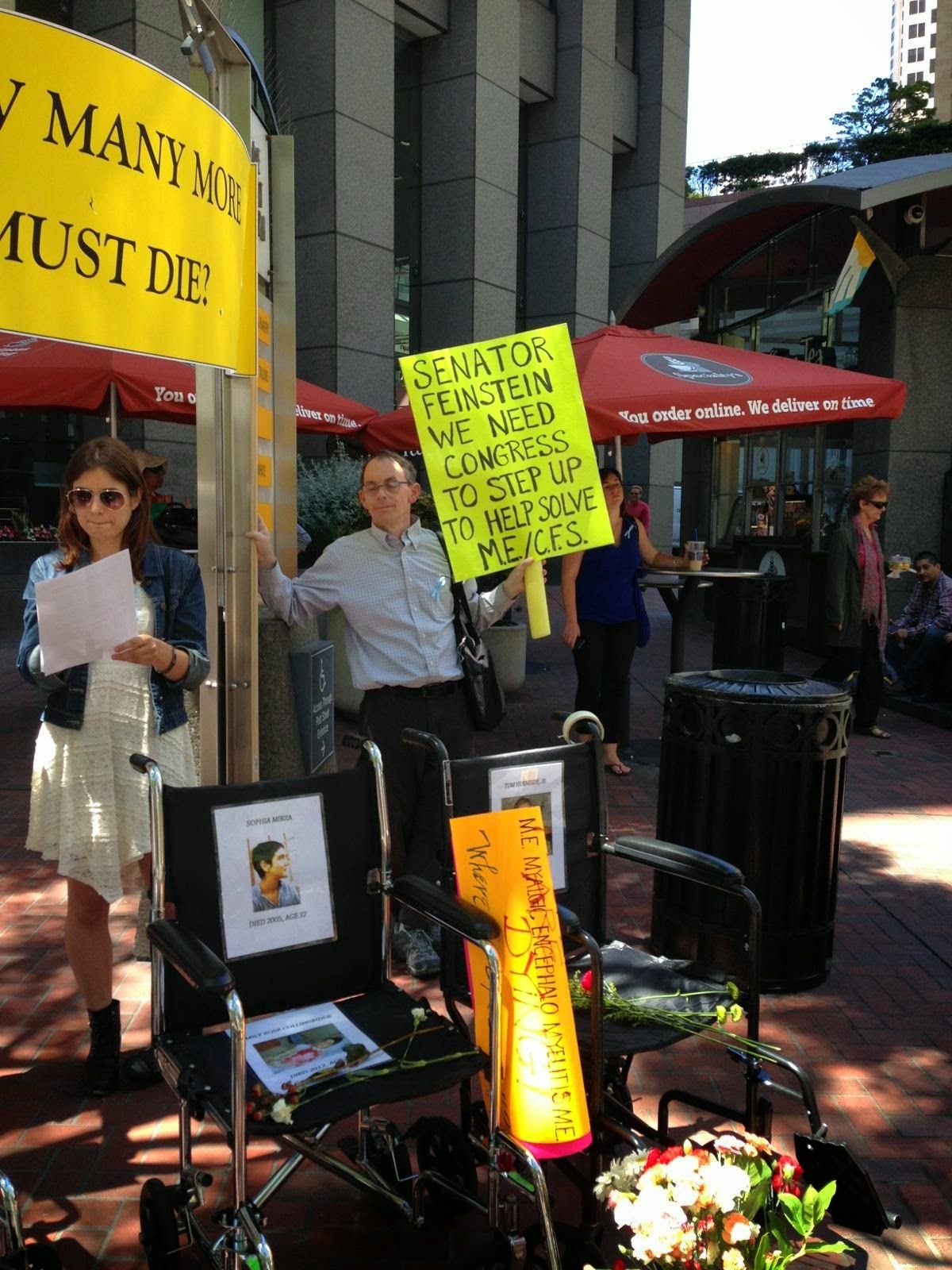 Then we packed up, and repeated the demonstration a few blocks away at McKesson Plaza, where Senator Dianne Feinstein's office is located. One quick-thinking member of the group went into the building to fetch Senator Feinstein's aide, who came down to watch the demonstration. We spoke with him about the gravity of the illness, and delivered the two petitions, the experts' letter to Secretary Sebelius calling for the cancellation of the IOM contract, and a 55-page list of people who had died of ME. I handed him a copy of the obituaries the group had read.

Our message was loud and clear: "There are a million of us. We are dying of this disease. We've had 30 years of neglect from HHS, we are citizens, and we vote. It's time our representatives did their jobs and represented us!" 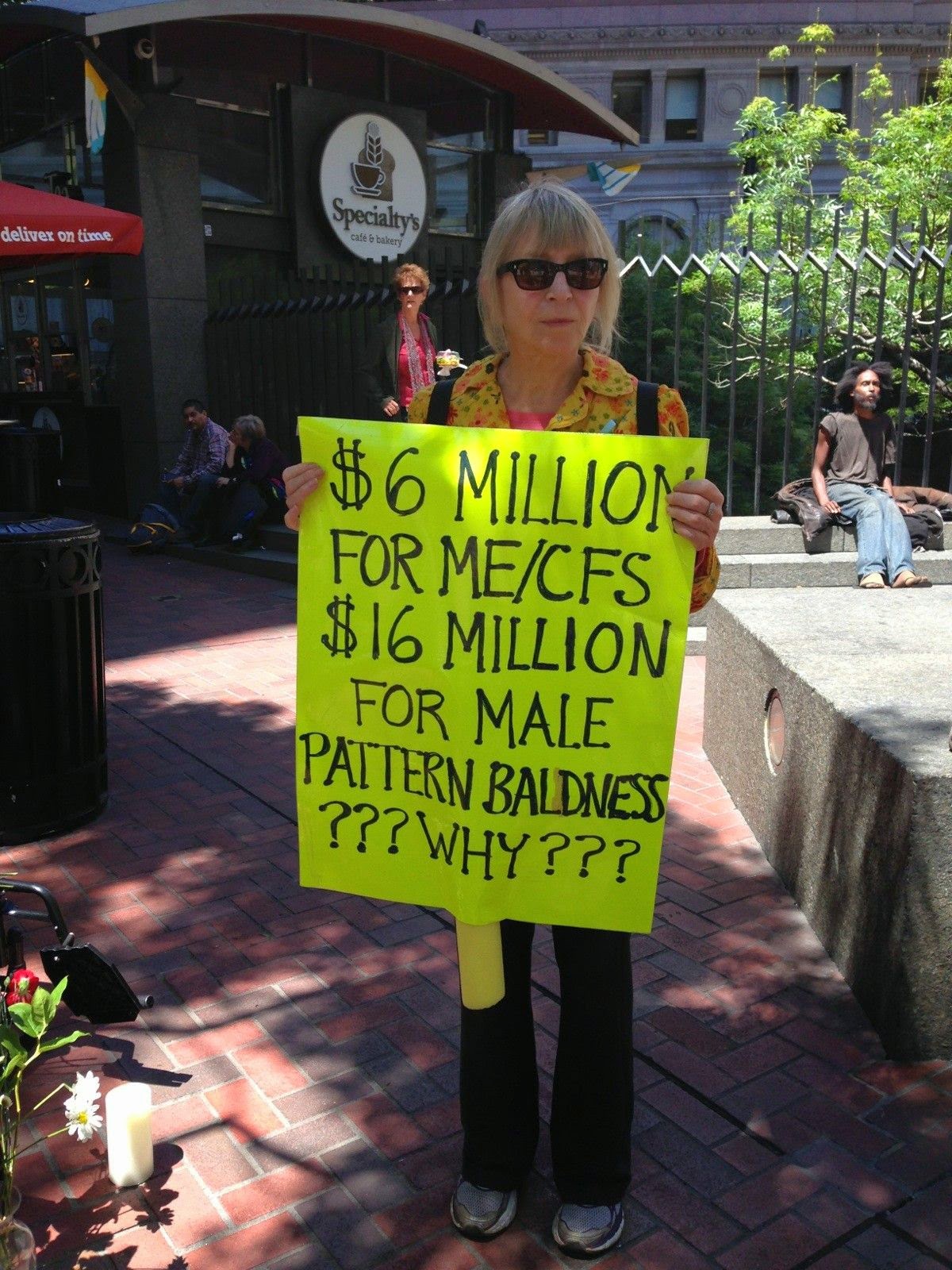 What was most impressive about the demonstration was the degree to which people were willing to step up to the mat. When I asked, "Who wants to come with me to Nancy Pelosi's office and HHS?" every person there stepped forward. (The guards would only let two people in, unfortunately.) There was no question that if we had been allowed, all 17 of us would have marched into the Federal Building that day.

This may not have been the largest, but it was one of the most inspiring political events I have ever attended.

I want to give my profound thanks to everyone who came, as well as to all those who couldn't attend but expressed their support through donations, or by simply cheering us on. It buoyed us to know that you were all there in spirit.
____________________

On the other side of the country, Mary Dimmock was busy setting up a May 12 demonstration at the Capitol Building. This year marks the 30-year anniversary of the Incline Village outbreak that saddled our community with the name "chronic fatigue syndrome"; the theme of the demonstration was "30 Years of Neglect."

Mary and two supporters, Marty Shore and Jim Mills, each of whom has a family member ill with ME/CFS, spread the Banner of Hope on the lawn. The Banner of Hope is a 65-foot long assembly of pillow case tops, each one of which has the name and dates of illness of a person bedridden with ME/CFS.

The Banner provides a moving testament to the toll this disease takes on the people it strikes. The demonstrators also displayed a banner with the portraits and obituaries of people who have died of ME/CFS.Two reporters, one from Televisa's Washington office and one from Medill News Service, came by to cover the event, and to arrange an interview with Mary. As Mary said, "Two leads is a very good thing."

Of the demonstration, Mary said, "There were mostly tourists there that day, but one person took a handout and said, 'I think this is the disease my daughter-in-law has!'

Giving even one person such a valuable piece of information was worth it."

Posted by Erica Verrillo at 3:12 PM