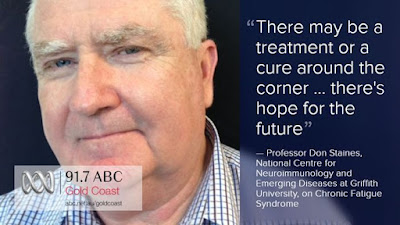 A few days ago, Griffith University, located in Queensland Australia, announced that it had developed a screening test for ME/CFS. Dr. Donald Staines, whose first article about ME appeared as early as 1985, has been researching ME/CFS for over a decade. Likewise, Dr. Sonia Marshall-Gradisnik, Dr. Ekua Brenu and fellow researchers have pursued the underpinnings of ME/CFS with studies that have revealed several markers of immune dysfunction, including natural killer and B-cell abnormalities, autoimmune markers, and increases in inflammatory cytokines, among other findings.

Dr. Marshall-Gradisnik believes that a biomarker for ME/CFS can be found in micro RNAs (miRNA) - tiny RNAs associated with gene expression which regulate many biological processes in plants, animals, and even viruses. Marshall-Gradisnik's team was the first to identify circulating miRNAs from ME/CFS patients. They found three distinct miRNAs that might serve as biomarkers.

Dr. Marshall-Gradisnik and her team have applied for three patents for biomarkers potentially useful in diagnosing ME/CFS. If the patents are approved, there may be a commercially viable test in the offing. But, before a test can be developed and marketed it has to be successfully used on a significant portion of the patient population. So far, no large-scale studies have been done. Hopefully, with the recent attention that has been drawn to the plight of ME/CFS sufferers in Australia, Griffith University will get some backing to extend its research.

Screening test for chronic fatigue syndrome on its way

The research team from the National Centre for Neuroimmunology and Emerging Diseases (NCNED), Menzies Health Institute Queensland, has identified new markers that can be used to screen patients and is now looking to partner with diagnostic companies to bring a test to market. The screening test is expected to benefit all those with symptoms of the condition.

“Over the last four years, with support from the Queensland Government and philanthropic donors, we have identified unique markers in CFS patients,” says Professor Marshall-Gradisnik.

“This screening test may be expected to become a laboratory standard to provide more certain, and cost-efficient, diagnosis for CFS. Currently patients may be undergoing a range of tests to diagnose for CFS which incurs a significant cost to the health care system.

“CFS, also known as myalgic encephalomyelitis (ME), affects up to 400,000 Australians, many of whom are housebound or bedbound. Patients are isolated and further stigmatised by disbelief of their condition.

“This illness has traditionally been difficult to diagnose, meaning that people can go for months without getting the care and attention they require. We are confident that the new screening test currently in development will provide efficient and increasingly accurate screening for people with CFS. This test may also be used to monitor and track the progression of their illness,” says Professor Staines.

Awareness and support of CFS is currently gathering momentum in Australia, with a recent Senate Estimate Committee highlighting the requirement for increased research and funding regarding the condition.
Posted by Erica Verrillo at 9:05 AM