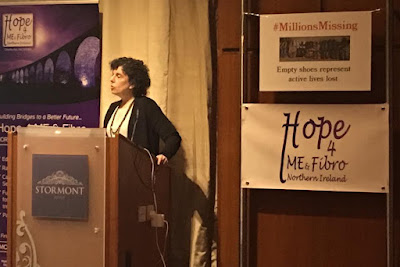 
Hope 4 ME & Fibro Northern Ireland ran an ambitious and exciting conference on Monday 6th June in The Stormont Hotel, Belfast.  The conference, “Chasing Competent Care” delivered a strong message calling for change to the currently inadequate care situation for ME and fibromyalgia patients in Northern Ireland.

Chairperson, Martina Marks opened the meeting, welcomed everyone and thanked the Big Lottery Fund for their sponsorship of the event. Her welcome was followed by an impassioned plea from Joan McParland, the founder and treasurer of Hope 4 ME & Fibro NI, to have medical professionals take patients’ symptoms seriously.  Joan explained that she had been ill, and operating at less than 30% of her normal capacity, since 1999. In that time no effective treatments had been offered, and one consultant had even suggested she was simply reading too much into her symptoms and that she should see a psychiatrist!

Joan thanked the many volunteers and family members who made the event possible, and also the medical professionals and MLAs in the audience for taking time to attend.

Sally Burch, another charity trustee, then pointed out that ME (myalgic encephalomyelitis) and fibromyalgia are both disorders recognised by the World Health Organisation. She then explained that the most severely affected by ME could be left bed-bound, tube fed and lying in darkened rooms for weeks, months and years! She further described the severely debilitating nature of fibromyalgia and how the invisible pain that sufferers endure can have devastating life consequences. Sally outlined the symptom overlap between these conditions and suggested that biomarker development and medical research was now urgently required. 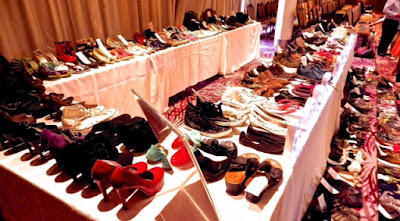 Lined up, to the side of the speakers’ podium, was a haunting display of over 200 pairs of empty shoes. These were part of the global #MillionsMissing campaign. Each pair of shoes carried a tag with the name of a patient unable to participate in their active lives due to ME and/or fibromyalgia.  During the conference many attendees took time to read the comments on the tags and to consider the magnitude of the devastation caused by these largely forgotten and ignored conditions.

First speaker up was Dr. Joe McVeigh, who outlined the problems with exercise and fibromyalgia. He explained that whilst exercise is important for maintaining health, that it must be conducted at a level manageable for each individual patient. He called this the “Goldilocks approach”, and explained that at no time should attempted exercise cause a patient to relapse.

Professor Malcolm Hooper next gave a strong talk berating the inadequacies and misleading conclusions of the PACE Trial.  At one point, he suggested that the PACE Trial was potentially fraudulent and told us that he had once even said as much in The House of Lords.  This elicited a spontaneous round of applause from the audience. Feelings run high amongst patients on the PACE trial, mostly because it has been used to support the NHS recommended therapies of Cognitive Behaviour Therapy (CBT) and Graded Exercise Therapy (GET), both of which have been demonstrated to cause harm in patient surveys.

Professor Hooper questioned the motives of the PACE trial authors in promoting results that carry such marginal benefits and such great potential risks. He recommended that patients reference Mark Vink’s paper, “The PACE Trial Invalidates the Use of Cognitive Behavioral andGraded Exercise Therapy in Myalgic Encephalomyelitis/ Chronic Fatigue Syndrome:A Review,” any time they were asked to undertake these therapies.

After this lively and well received talk, the conference paused for a comfort break. The weather was uncharacteristically balmy for Northern Ireland, and some of the audience sat outside in the evening sun as they contemplated the issues raised.

Natalie Boulton, carer to her daughter who has severe ME, spoke next.  She opened by showing a clip from the video “Voices from the Shadows”, that gave the audience a disturbing insight into the annihilation caused by very severe ME.  Natalie told us she had recently followed up with some of the patients from the video and found many of them had worsened, and that both Emily Collingridge and Lyn Gilderdale had since died. She spoke of the horror of the treatments doled out by psychiatrists who believed patients to be faking their illness. Hers was a genuinely moving and sobering talk.

Next Professor Mady Hornig from Columbia University, USA, gave a detailed and highly informative account of her work towards developing blood biomarkers.  She explained how immunity and gut microbiota can be linked to the brain, its functioning and mood.  She talked about the epigenetic changes that can occur in the microbiome during a person’s lifetime and the link to serotonin production. She also talked about measuring blood molecules such as cytokines before and after an exercise challenge in ME patients, and comparing these changes to healthy controls. These cytokines being the most promising as potential biomarkers. Although much of what she described cannot be simply summarised, the audience was left with a strong feeling that Professor Hornig is now working determinedly to solve the biochemical riddles produced by ME.

Dr. Pamela Bell then took the podium to talk about the problem with pain. Dr. Bell has worked extensively in the field of pain, and is now chair of the Pain Alliance Northern Ireland. She emphasised the widespread nature of chronic pain and its disabling effects, noting that once pain becomes chronic it no longer serves a useful purpose in the body. She recognised the difficulties with effectively treating ongoing pain and explained that different types of pain needed different drug types to alleviate symptoms.

The final speaker of the evening was Louise Skelly from the Patient and Client Council of Northern Ireland.  She spoke of her frustration at trying to bring about change to the current impasse with Health and Social Care Board in Northern Ireland regarding the care on offer for ME and fibromyalgia patients. She spoke of her determination to follow through with the campaign to improve the situation, and of the great need of these neglected patient cohorts.

Martina Marks then brought the conference to a close. Overall the atmosphere of the evening was one of both frustration, and of optimism. Frustration that change seems to be taking so long to happen and for the injustices that have occurred along the way, but also optimism that things are starting gain momentum towards real medical advances for the future.

As the hall emptied, the lines of lonely shoes from the #MillionsMissing campaign were gathered up, their labels still attached, and some-one was heard to say: “These are the folk we do all this for, they will not be left forgotten any longer.”

Please consider using this link for all your online shopping and raise funds for Hope 4 ME & Fibro Northern Ireland at NO charge to you!


https://www.giveasyoulive.com/refer
Posted by Erica Verrillo at 9:05 AM

Email ThisBlogThis!Share to TwitterShare to FacebookShare to Pinterest
Labels: events

#MillionsMissing: A Day of Global Protest 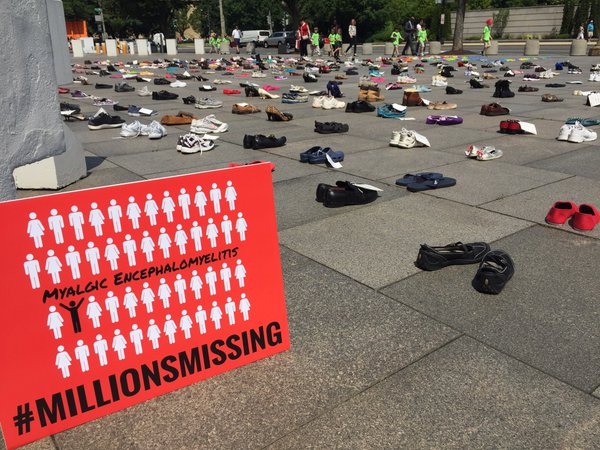 By Erica Verrillo On May 25, 2016, protesters all around the globe gathered to demand greater recognition and research funding for ME/CFS. Simultaneous protests were held in Melbourne, Australia; London, England; Belfast, Ireland, Ottawa, Canada; and in Boston, Washington, DC, Seattle, San Francisco, Dallas, Raleigh, Atlanta. and Philadelphia in the U.S. It was the largest protest ever held for this disease, involving thousands of participants worldwide. The Millions Missing protest was organized by MEAction and coordinated by a group of dedicated advocates in order to highlight the long neglect of patients with ME and CFS. Millions missing represents the missing millions of dollars of research funding that should have been spent to find a cause and a cure. Millions missing also represents the millions of people who are missing their careers, their families, their friends, and their lives due to the ravages of a disease that can disable a sufferer for decades. In most of these demonstrations, a display of shoes, sometimes in the hundreds, was laid out to symbolize missing patients who, due to illness, could not protest in person. Virtual demonstrations – pictures of shoes placed in driveways, on doorsteps, and on walkways accompanied by personal notes– were held in tandem. The virtual protest generated over 10,000 tweets with the hashtag #MillionsMissing as well as thousands of posts on Facebook. Local organizers took advantage of this event to schedule meetings with HHS officials as well as their representatives. Jennifer Brea, founder of #MEAction, met with Senator Cory Booker's staff (Dem NJ), and patient advocate Sonya Heller Iray met with Senator John McCain (Rep AZ) and his staff for an hour.To view photos from the #MillionsMissing protests around the world, go here.The #MillionsMissing protest list of demands can be found here.For #MillionsMissing in the news go here.

More than one hundred people gathered in front of the Federal Building in San Francisco. Carol Head, CEO of Solve ME/CFS Initiative, exhorted the federal government to live up to its promises. “We're all here today, because it's time for our government to increase funding and support for this disease,” she said. Ron Davis, scientific director of Open Medicine Foundation, talked about the research he is doing. “We are very close to finding a biomarker,” he said. “We do NOT want to wait another thirty years.” And as his wife, Janet Dafoe, spoke about their severely ill son, Whitney, the crowd chanted “Whitney ... Whitney ... Whitney...”  bringing tears to her eyes.

In Boston, demonstrators assembled at the JFK Federal Building. They handed out information and gathered signatures on a petition to support more funding for ME/CFS. Members of the group met separately with senior officials from the Boston branch of Health & Human Services to ask for their support. Charmian Proskauer, President of the Mass CFIDS/ME and FM Association was upbeat about the meeting. “They were very well informed, understood our issues, and asked great questions. We see this as the beginning of an on-going relationship,” she said.

In Melbourne, hundreds of shoes were placed on the lawn in front of the Victoria State Library. (Photo credit: Karyn Adams)

In London, demonstrators held a silent protest at the Department of Health. Many stretched duct tape across their mouths to symbolize government neglect of ME/CFS patients. Ollie Cornes, a former software engineer, said, “The treatments the NHS provides are so ineffective as to be a waste of time and can be very harmful, which is why we are protesting at the Deptartment of Health.” Like so many other patients, Cornes was unable to attend the demonstration in person. He was represented by a pair of red baseball shoes.
Posted by Erica Verrillo at 10:37 AM