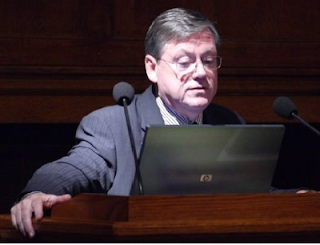 Dr. Kenny De Meirleir spoke at the Whittemore Peterson Institute on January 28, 2013. The following summary of his talk was posted on January 30 on WPI's blog, Wings of Hope.

Dr. Vincent Lombardi, WPI Research Director, introduced Dr. De Meirleir as one of the world's foremost experts in ME and primary research collaborator on WPI’s current RO1 federal grant. He also stated that Dr. De Meirleir has authored hundreds of publications and several books on ME/CFS and other medical research topics. Dr. Daniel Peterson, who was in the audience, was also recognized for his outstanding contributions to this field of medicine.

Dr. De Meirleir's talk included years of significant research which is very technical and complicated. Therefore, this review is not meant to be a summary of the underlying science but rather a summary of the practical application of this work. However, we will place a recording of this talk on the WPI website: www.wpinstitute.org, as soon as possible for those who are interested in the actual research data.

Dr. De Meirleir presented a comprehensive lecture on the many factors that appear to play a role in the pathophysiology of ME.  In support of his conclusions, he drew information from other well-known researchers in the field including Drs. Chia, Klimas, Peterson, Mella and Fluge, as well as his more recent clinical studies of patients from Belgium and Norway. After the one hour and fifteen minute presentation, interested patients, researchers, doctors, nurses, and medical students were given a chance to ask questions.

Dr. De Meirleir uses a number of diagnostic tests to diagnose his patients’ underlying biological abnormalities and to guide his successful treatment protocols. Biomarkers include abnormally low NK cell number and function, cytokines indicating a shift in the balance of Th1 and Th2 immune responses, up regulation of Th17 immune cells, and abnormal levels of nagalase and elastase activity. He also tests for various active infectious agents including Borrelia, Bartonella, Brucella, mycoplasma, parasites, and various herpes viruses. He stated that environmental and genetic factors contribute to aberrant protein conformation in some patients.  Other diagnostic tests include fecal analysis and tests for levels of LPS or soluble CD14 as an indicator of gut inflammation.

Basic to Dr. De Meirleir’s treatment protocol is a plan that addresses specific dietary restrictions. He reported that many patients are fructose, lactose, casein and/or gluten intolerant. His patients often begin feeling better after eating a diet free of these substances, as they are most likely to cause an inflammatory response. In addition, he includes a fecal microbial analysis to determine whether or not to begin treatment with pulsed antibiotics. Based on the fecal analysis, which indicates whether or not his patients are suffering from a compromised intestinal barrier, he also prescribes specific probiotics, prebiotics such as lactoferrin, and digestive enzymes. When viruses or other pathogens become chronic Dr. De Meirleir prescribes antiviral therapies and/or additional antibiotic treatments.

It is generally accepted knowledge that ME patients have difficulty controlling various herpes viruses and other pathogens, in addition to exhibiting abnormal natural killer cell function. Subsequent searches for immune modulating drugs have included trials of several different products. Gc-MAF is a macrophage stimulating substance that has recently shown great promise.  Dr. De Meirleir highly recommends that patients address any leaky gut issues before beginning treatment with Gc-MAF.  He also mentioned risks that can be associated with this type of treatment.  Risks include a shift to autoimmunity and an immune reconstitution reaction known as IRIS although  none of his patients have developed autoimmune disease as a result of Gc-MAF treatments and less than 20% have experienced IRIS. Dr. De Meirleir routinely monitors his patients for IRIS cytokines after starting them on very low doses of Gc-MAF, as a method of prevention. Other immune supportive therapies include the use of Kutapression/Hepapressin complex (Nexavir), which has been reported to inhibit EBV and HHV-6, and Isoprinosine for those with low serum uric acid levels. Finally, Rituximab, a B-cell depletion immune therapy, has been used successfully in a small trial of patients with ME by oncologists Fluge and Mella. Because of the delayed therapeutic response of two to seven months, the authors of this study remarked that there is a possibility that ME has an autoimmune component. (Note: These two physicians are now looking for collaborative research sites and additional funding to engage in a much larger clinical trial due to their 67% rate of success.)

Dr. De Meirleir concluded his talk with a detailed slide describing the various pathways that are disrupted in ME and several other autoimmune diseases. He spoke about a continuum of autoimmune diseases including ME, lupus, RA, type 1 diabetes, and remitting MS that involve a dysregulation of two important immunological pathways, 2’-5’OA synthetase and Th1/Th2 immunity.

It was evident from his lecture that the key to Dr. De Meirleir’s success with patients is his recognition of the serious infectious and immunological issues facing those with ME. His research provides strong evidence for the support of biological testing and treatment.

WPI is thankful to Dr. De Meirleir for his outstanding commitment to this patient population. We feel fortunate to be able to provide his lecture as part of our mission to support outreach and education. We look forward to sharing more good news with you in the future.
Posted by Erica Verrillo at 5:38 AM