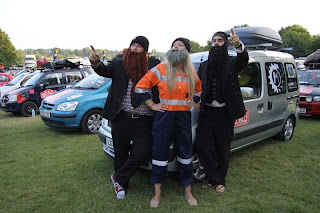 Press Release: Los Angeles, CA, August 04, 2013 --(PR.com)-- Beard Head, Inc. is thrilled to announce that it is sponsoring the Machiniacs team at this year’s 2013 Mongol Rally, a pan-continental 10,000 mile roadtrip for charity. The team will wear Beard Head beanies throughout the 12-week journey from the United Kingdom to Mongolia and back.

“Our team was immediately struck by Beard Head’s wonderful mix of playfulness and practicality,” team VP Loren Adams said. “The Mongol Rally is a conquest - so it seems appropriate to warm our faces with Barbarian-esque Beard Head beanies.”

The team has pledged to raise money for Cool Earth and for ME/CFS Australia, an organization dedicated to beating Myalgic Encephalomyelitis (ME) and Chronic Fatigue Syndrome (CFS). ME/CFS is a severe, acquired illness related to the dysfunction of the brain, gastrointestinal, immune, endocrine, and cardiac systems.

“We’re excited to help support a journey that is inspiring in so many ways,” said David Stankunas, President of Beard Head, Inc. “The Mongol Rally embodies the sense of adventure and bravery that Beard Head is all about.”

Loren Adams was diagnosed with ME/CFS two years ago. Her diagnosis and recovery motivated her to embark on the challenging Mongol Rally voyage.

“We hope that completion of such an ambitious journey will stand as a reassuring message for people currently suffering from this debilitating illness,” Ms. Adams said.

The team is driving the “Can-Do Kangaroo,” a 2003 Renault Kangaroo covered with Beard Head-inspired artwork. Live coverage of their trek can be found at: machiniacs.org and theadventurists.com.

The Mongol Rally has raised over five million dollars for charity since its inception in 2003. The event is largest run by the UK-based group The League of Adventurists International.

Beard Head, Inc. is the maker of the original beard beanie. For more info, visit Beardhead.
Posted by Erica Verrillo at 4:23 AM