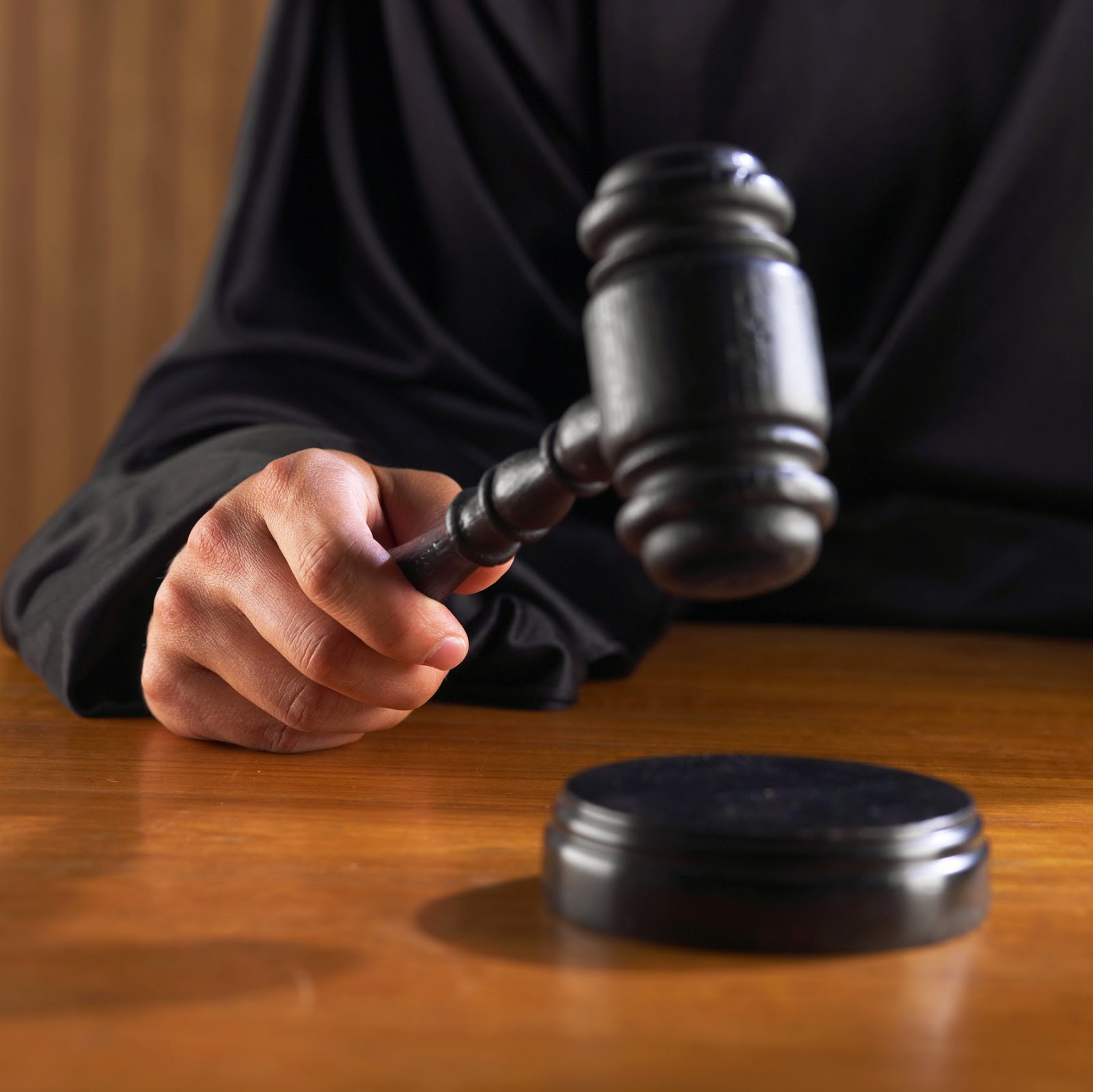 On January 9, 2014, Attorney Jeannette Burmeister filed a federal lawsuit against HHS and NIH in the U.S. District Court for the Northern District of California for failure to comply with the requirements of the Freedom of Information Act (FOIA) regarding documents she requested relating to the Institute of Medicine (IOM) “study” of diagnostic criteria for myalgic encephalomyelitis/chronic fatigue syndrome.

On September 2, the Court ordered the government to comply with Attorney Burmeister’s request. You can read the full complaint HERE.

Reprinted with the kind permission of Jeannette Burmeister and Thoughts About ME.

The U.S. District for the Northern District of California awarded me today–having won my FOIA lawsuit–my entire attorneys’ fees in the amount of $139,147. Judge Vince Chhabria ordered the defendants, HHS and NIH, to pay me these fees. Please see below for a copy of the order.

In the Court’s order, the Judge noted:

The defendants’ conduct in this matter has been absolutely deplorable. They have fought tooth and nail trying to avoid compliance with federal law and to delay production of relevant documents relating to the IOM project as long as possible. Throughout the entire proceedings, the defendants have acted unreasonably and shamefully, really, in their relentless attempts to circumvent their obligations under FOIA. Their inexcusable conduct has put me through the wringer, which has had a direct and dramatic impact on my health. I will share with the community, at a later time, details of the many instances of the defendants’ appalling actions in this matter. But here is a high-level list:

The defendants failed to make a determination in response to my FOIA request (from more than a year ago, seeking documents relating to the IOM contract with HHS) within the 20 business days required by FOIA. I waited several weeks and sent them one last communication notifying them that legal action was imminent. When they still did not respond, I brought my suit pro se, i.e. I was representing myself in an attempt to avoid attorneys’ fees. After I filed the lawsuit, defendants produced a mere 88 pages, only 22 relating specifically to the IOM (one of them blank), for a very high-priority and extraordinarily controversial $1 million project. It was clear that their search and production of documents was woefully inadequate (as the Court later agreed when it granted my motion for summary judgment). The defendant’s subsequent response to my complaint was, once again, late. It was then that I realized that they had no intention of complying with the law in response to my entirely reasonable and very straightforward FOIA request, even faced with a lawsuit.
Therefore, I hired the law firm of Baker & McKenzie LLP.


Every taxpayer dollar spent by HHS and NIH in this lawsuit–every single one–was caused by the government’s appalling tactics. Instead of remedying the inadequate search and production, they went into full-blown attack mode, filing a meritless and unwarranted motion, making frivolous legal arguments, making false statements under penalty of perjury, misrepresenting my statements and actions, misrepresenting legal authority, etc. They went so far as to accuse me of lying under penalty of perjury, which shows their mindset very clearly: Since they had no qualms about blatantly misrepresenting the facts, they thought accusing me of the same might work. It didn’t.

A few days ago, in response to the Judge’s order from September to produce all documents I sought, Counsel for defendants delivered about 4,300 pages of supposedly responsive documents demonstrating very clearly the laughable number of documents originally produced. A cursory review of those documents shows that their misrepresentations–again made under penalty of perjury and in opposing Counsel’s motions–were far worse than it initially appeared. It is also obvious that this new production is again inadequate and does not comply with FOIA in many respects.

The community will be extremely interested in seeing the documents that they produced recently. I will make every effort to publish those of interest (I will save myself the energy of publishing the NICE guidelines or the IOM Gulf War Report from earlier this year.) as quickly as possible, but my health has been very poor as a result of this litigation, so I ask for some patience.

I want to thank Patricia Carter, the owner of MECFS Forums, for providing a helpful declaration in support of my attorneys’ fees motion. I also want to especially thank Eileen Holderman, the former and most effective patient representative on CFSAC in its history, for her invaluable assistance, including providing a declaration in support of my motion. Finally, my sincere thanks go to my attorneys, Bruce Jackson, Edward Burmeister and Christina Wong, as well as paralegal, Nada Hitti, and assistant, Chris von Seeburg, for their unflagging efforts and excellent representation in this case.

Note: I owe the entire amount to Baker & McKenzie and I would have had to pay it regardless of whether the Court had awarded me the fees. What I am saying is that I don’t get to keep the money, just to avoid a misunderstanding on that front. 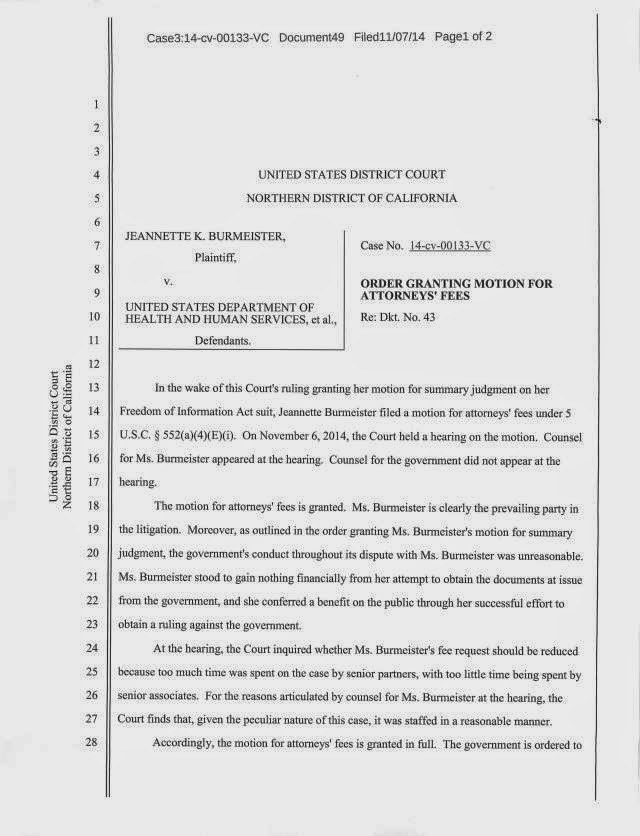 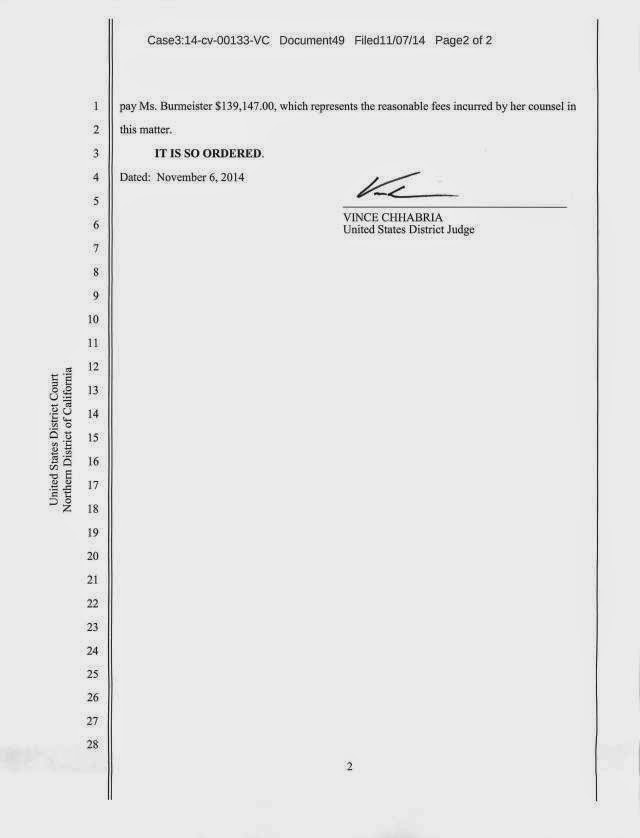 Posted by Erica Verrillo at 5:11 AM