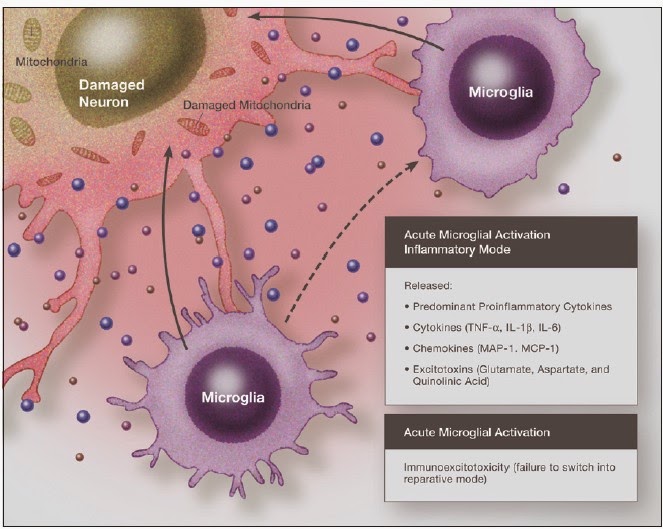 For those who missed Mady Hornig's talk at the P2P Workshop, the press release below announces the research she discussed.

Essentially, what the researchers found was an upregulated immune response in ME/CFS patients ill for three years or less, followed by "immune exhaustion." (You can read a summary of her talk HERE. It's half way down the page.)

This research supports Dr. Cheney's early hypothesis that an infectious agent causes increased cytokine production (he focused on interferon alpha), which in turn led to excitotoxicity in the brain. It also supports Dr. Bell's one-two punch theory, in which an original insult sets the stage for immune dysregulation and chronicity.

The Columbia findings not only help establish a natural history of the disease, they also support the theory that the driving mechanism for the illness is CNS inflammation. When cytokines are released in the brain, due to injury or infection, they stimulate microglial activation, which in turn produces inflammation. The recent PET scan study by Nakatomi et al. which found neuroinflammation in the brains of ME/CFS patients due to microglial activation dovetails neatly with the Columbia study. Previous studies conducted by Stanford and other researchers which have found brain abnormalities, implicate CNS inflammation as the underlying driver of symptomatology as well.

NEW YORK (Feb. 27, 2015)—Researchers at the Center for Infection and Immunity at Columbia University’s Mailman School of Public Health identified distinct immune changes in patients diagnosed with chronic fatigue syndrome, known medically as myalgic encephalomyelitis (ME/CFS) or systemic exertion intolerance disease. The findings could help improve diagnosis and identify treatment options for the disabling disorder, in which symptoms range from extreme fatigue and difficulty concentrating to headaches and muscle pain.

These immune signatures represent the first robust physical evidence that ME/CFS is a biological illness as opposed to a psychological disorder, and the first evidence that the disease has distinct stages. Results appear online in the new American Association for the Advancement of Science journal, Science Advances.

With funding to support studies of immune and infectious mechanisms of disease from the Chronic Fatigue Initiative of the Hutchins Family Foundation, the researchers used immunoassay testing methods to determine the levels of 51 immune biomarkers in blood plasma samples collected through two multicenter studies that represented a total of 298 ME/CFS patients and 348 healthy controls. They found specific patterns in patients who had the disease three years or less that were not present in controls or in patients who had the disease for more than three years. Short duration patients had increased amounts of many different types of immune molecules called cytokines. The association was unusually strong with a cytokine called interferon gamma that has been linked to the fatigue that follows many viral infections, including Epstein-Barr virus (the cause of infectious mononucleosis). Cytokine levels were not explained by symptom severity.

“We now have evidence confirming what millions of people with this disease already know, that ME/CFS isn't psychological,” states lead author Mady Hornig, MD, director of translational research at the Center for Infection and Immunity and associate professor of Epidemiology at Columbia’s Mailman School. “Our results should accelerate the process of establishing the diagnosis after individuals first fall ill as well as discovery of new treatment strategies focusing on these early blood markers.”

There are already human monoclonal antibodies on the market that can dampen levels of a cytokine called interleukin-17A that is among those the study shows were elevated in early-stage patients. Before any drugs can be tested in a clinical trial, Dr. Hornig and colleagues hope to replicate the current, cross-sectional results in a longitudinal study that follows patients for a year to see how cytokine levels, including interleukin-17A, differ within individual patients over time, depending on how long they have had the disease.

The study supports the idea that ME/CFS may reflect an infectious “hit-and-run” event. Patients often report getting sick, sometimes from something as common as infectious mononucleosis (Epstein-Barr virus), and never fully recover. The new research suggests that these infections throw a wrench in the immune system’s ability to quiet itself after the acute infection, to return to a homeostatic balance; the immune response becomes like a car stuck in high gear. “It appears that ME/CFS patients are flush with cytokines until around the three-year mark, at which point the immune system shows evidence of exhaustion and cytokine levels drop,” says Dr. Hornig. “Early diagnosis may provide unique opportunities for treatment that likely differ from those that would be appropriate in later phases of the illness.”

The investigators went to great lengths to carefully screen participants to make sure they had the disease. The researchers also recruited greater numbers of patients whose diagnosis was of relatively recent onset. Patients’ stress levels were standardized; before each blood draw, patients were asked to complete standardized paperwork, in part to engender fatigue. The scientists also controlled for factors known to affect the immune system, including the time of day, season and geographic location where the samples were taken, as well as age, sex and ethnicity/race.

In 2012, W. Ian Lipkin, MD, director of the Center for Infection and Immunity, and colleagues reported the results of a multicenter study that definitively ruled out two viruses thought to be implicated in ME/CFS: XMRV (xenotropic murine leukemia virus [MLV]-related virus) and murine retrovirus-like sequences (designated pMLV: polytropic MLV). In the coming weeks, Drs. Hornig and Lipkin expect to report the results of a second study of cerebrospinal fluid from ME/CFS patients. In separate ongoing studies, they are looking for “molecular footprints” of the specific agents behind the disease—be they viral, bacterial, or fungal—as well as the longitudinal look at how plasma cytokine patterns change within ME/CFS patients and controls across a one-year period, as noted above.

“This study delivers what has eluded us for so long: unequivocal evidence of immunological dysfunction in ME/CFS and diagnostic biomarkers for disease,” says senior author W. Ian Lipkin, MD, also the John Snow Professor of Epidemiology at Columbia’s Mailman School. “The question we are trying to address in a parallel microbiome project is what triggers this dysfunction.”

Support for the study was provided by the Chronic Fatigue Initiative of the Hutchins Family Foundation and the National Institutes of Health (AI057158; Northeast Biodefense Center-Lipkin).

Founded in 1922, Columbia University’s Mailman School of Public Health pursues an agenda of research, education, and service to address the critical and complex public health issues affecting New Yorkers, the nation and the world. The Mailman School is the third largest recipient of NIH grants among schools of public health. Its over 450 multi-disciplinary faculty members work in more than 100 countries around the world, addressing such issues as preventing infectious and chronic diseases, environmental health, maternal and child health, health policy, climate change & health, and public health preparedness. It is a leader in public health education with over 1,300 graduate students from more than 40 nations pursuing a variety of master’s and doctoral degree programs. For more information, please visit www.mailman.columbia.edu.