Ampligen to Be Supplied Throughout Europe As Well As Turkey 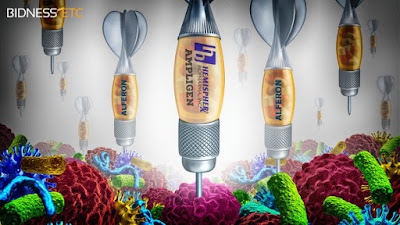 Hemispherx Biopharma's agreement to supply Ampligen to ME/CFS patients in Europe could not have come at a better time.

A  recent paper by a group of downstate New York psychiatrists made headlines when it proposed that fibromyalgia and CFS (among others) should be placed on the spectrum of anxiety disorders.

The agreement to use an immune modifier to treat ME/CFS underscores the position stated in the IOM report that this is not a psychogenic disease, much less an anxiety disorder.

Press Release: PHILADELPHIA, Aug. 10, 2015 (GLOBE NEWSWIRE) -- Hemispherx Biopharma, Inc. (NYSE MKT: HEB) (the "Company" or "Hemispherx"), reported today that it has executed an agreement with Impatients, N.V., a Netherlands based company doing business as myTomorrows, for the commencement and management of an Early Access Program (EAP) in all of Europe and Turkey.

myTomorrows, as Hemispherx' exclusive service provider in Europe and Turkey, will perform EAP activities in Europe and Turkey to include the supply of rintatolimod for the treatment of Chronic Fatigue Syndrome (CFS) to patients with an unmet medical need.

Govert Shouten, Ph.D, Co-Founder & CBO at myTomorrows, said "Rintatolimod for CFS fits perfectly with the raison d'être of myTomorrows. CFS affects as many people in Europe as in the US and there is no drug approved anywhere specifically for CFS. In clinical trials rintatolimod has shown promising results for certain CFS patients particularly those most severely affected.

As we do with other life-threatening and debilitating diseases such as cancer, MS, and depression, myTomorrows will set up and roll out the early access programs needed to help these patients.

Thomas K. Equels, Executive Vice Chairman and CFO of Hemispherx said "We are very pleased to be collaborating with myTomorrows to provide rintatolimod under these unique Early Access Programs. Not only will this collaboration create the possibility for physicians to use rintatolimod under certain circumstances, myTomorrows will collaborate with these physicians to capture data on patients treated and such data may add to our other efforts to gain full regulatory approval in Europe, Latin America, Australia, New Zealand as well as the U.S. and elsewhere."

myTomorrows was founded by physicians and experts from the pharmaceutical industry who want to facilitate early access to developmental drugs for patients with high unmet needs. Ronald Brus, M.D., was the former CEO of Crucell, a vaccine company acquired by Johnson & Johnson for $2.4 billion in 2011. Govert Shouten was previously Vice President, Business Development at Crucell.

Rintatolimod is a member of a new class of specifically-configured ribonucleic acid (RNA) compounds targeted as potential treatment of diseases with immunologic defects and/or viral causation.

myTomorrows provides patients that are excluded from clinical trials access to drugs in development. They focus on disease areas with unmet needs; oncology, neurology, psychiatry and rare diseases. myTomorrows identifies the latest developments in drugs and facilitates requests for access to these drugs in development. Their physicians and bio-medical specialists identify the latest drug developments from across the globe. Physicians and pharmacists can register online and request information about the drugs myTomorrows provides access to. In most countries health authorities must grant permission for treatment with a non-registered drug. myTomorrows facilitates requests for permission for physicians and pharmacists.

Information contained in this news release, other than historical information, should be considered forward-looking and is subject to various risk factors and uncertainties. For instance, the strategies and operations of Hemispherx involve risk of competition, changing market conditions, changes in laws and regulations affecting these industries and numerous other factors discussed in this release and in the Company's filings with the Securities and Exchange Commission. The final results of these efforts could vary materially from Hemispherx's expectations. No evidence has suggested that rintatolimod will ever be commercially approved for the new potential treatment indications, including, but not limited, to the treatment of CFS.

To the extent that statements in this press release are not strictly historical, all such statements are forward-looking, and are made pursuant to the safe harbor provisions of the Private Securities Litigation Reform Act of 1995. Words such as "intends," "plans," and similar expressions are intended to identify forward-looking statements. The inclusion of forward-looking statements should not be regarded as a representation by Hemispherx that any of its plans will be achieved. These forward-looking statements are neither promises nor guarantees of future performance, and are subject to a variety of risks and uncertainties, many of which are beyond Hemispherx's control, which could cause actual results to differ materially from those contemplated in these forward-looking statements. Examples of such risks and uncertainties include those set forth in the Disclosure Notice, above, as well as the risks described in Hemispherx's filings with the Securities and Exchange Commission, including the most recent reports on Forms 10-K, 10-Q and 8-K. You are cautioned not to place undue reliance on these forward-looking statements, which speak only as of the date hereof, and Hemispherx undertakes no obligation to update or revise the information contained in this press release, whether as a result of new information, future events or circumstances or otherwise revise or update this release to reflect events or circumstances after the date hereof. No evidence is suggested that rintatolimod will ever be commercially approved for the CFS treatment indications mentioned in this release into USA or other countries.
Posted by Erica Verrillo at 10:40 AM