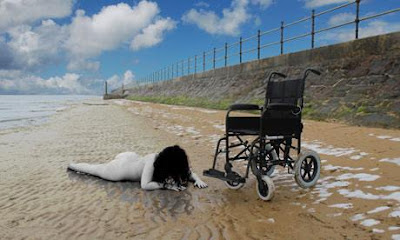 In an almost incomprehensible move, funding for ME/CFS has been eliminated entirely from the 2016 CDC budget. Both the IOM and the P2P reports - initiatives funded by the Federal government - stressed the woeful underfunding of ME/CFS and called for more research. Yet, the Federal government has responded by cutting funding completely.

Please take a moment to copy and paste the sample email below. Send it to:

If you live in Massachusetts please fill out the contact form for Elizabeth Warren. You can find it here:

http://www.warren.senate.gov/?p=email_senator
Send her this note:

I understand that the Senate Appropriations Committee has recommended that funding for the CDC’s programs for Chronic Fatigue Syndrome be terminated as of 2016.

I am a patient with Chronic Fatigue Syndrome (CFS), also known as Myalgic Encephalomyelitis or ME/CFS. The Institute of Medicine has just issued a major report on this “serious, chronic, complex, multisystem disease” citing the devastation on the lives of the 836,000 to 2.5 million Americans who suffer from this debilitating disease, the $20 billion annual cost to society, and the enormous need for more research which can lead to better treatments and a cure. We need MORE money for research, medical education, and information for patients and their families, NOT a termination of support.

I urge you to reinstate the $5.4 million funding for the CDC/CFS programs immediately.


Please act now! The $5.4 million in CDC funding for ME/CFS has been stricken from the Senate’s version of the 2016 federal budget. As you can see from the graphic below, ME/CFS was the only disease to be reduced to $0.

You have an opportunity to directly impact federal funding for ME/CFS by sending an email to the four key staff members who serve the Senators on this budget committee: 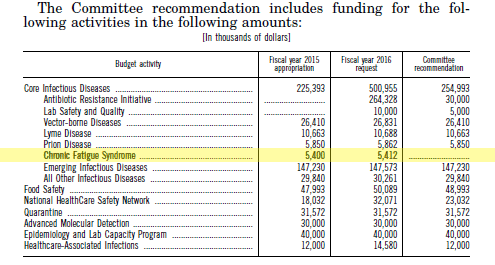 Please take a moment to send them an email asking that the funds be reinstated immediately. We have posted a draft letter here for you to use. Feel free to revise as it suits you but note that time is of the essence. We need to have the emails sent within the next week to have any chance at reversing this decision and preserving our much-needed funding.
_____________________

I am writing to urge you to reinstate the $5.4 million for Chronic Fatigue Syndrome funding. This is included in the CDC budget under Emerging and Zoonotic Infectious Diseases, on Page 59 of the Senate Budget.

I understand that the $5.4 million in funding submitted by the Centers for Disease Control for Chronic Fatigue Syndrome has been stricken from the 2016 appropriations bill by the Senate Appropriations Committee. This is an appalling act of inhumanity, and I urge you to reinstate the $5.4 million amount into the 2016 budget without delay.

The IOM committee further established that between 836,000 and 2.5 million Americans suffer from this devastating disease, which carries with it an economic burden of $17 to $24 billion to our country annually.

I am one of those Americans who has had their life and livelihood stolen by this illness, which renders 25 percent of us house- or bed-bound at some point. While the vast majority of us are not well enough to march on Capitol Hill to demand equitable funding from our government, rest assured we are still able to vote.

As a member of the Senate Subcommittee, I urge you to reinstate this $5.4 million CDC funding immediately. You have an opportunity to be on the right side of history.

Posted by Erica Verrillo at 2:41 PM