Sudden Onset has produced another excellent video explaining the science of ME/CFS.

In ME/CFS: The Scientific Evidence -Episode 3 - "The SIGNATURE" Mady Hornig's research on immune abnormalities is elegantly explained using images and music. I would encourage everyone to watch this 15-minute video, as you will not find a more concise explanation anywhere.

Mady Hornig's cytokine study, Distinct plasma immune signatures in ME/CFS are present early in the course of illness, made headlines last February for a number of reasons. First, it showed significant immune system alterations between patients and healthy controls. Second, it revealed why many other studies have not found similar abnormalities.

The answer turned out to be something fairly simple. The immune systems of people who had ME/CFS for three years (or less) had a cytokine pattern (a "signature") that was markedly different from controls as well as from patients who had been ill more than three years.

Based on these findings, the researchers concluded that people with short-term ME/CFS have upregulated immune systems indicative of a viral infection, and patients with long-term ME/CFS suffer from "immune exhaustion."

What was remarkable about this study was that not just one, but ALL twenty-four cytokines were altered in both long- and short-term patients compared to controls. 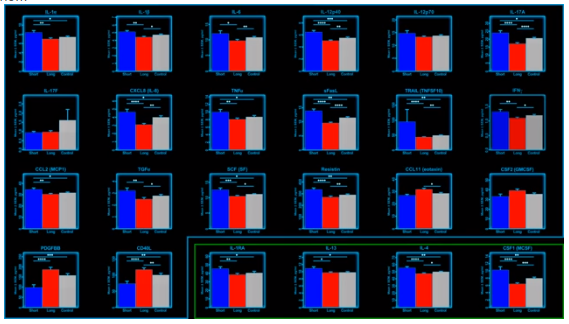 The early phase (blue bars) of ME/CFS showed elevations of nearly all the interleukins (pro-inflammatory cytokines) which is typical of an immune system fighting off an infection. Strikingly, patients who had been ill for less than a year were 100 times more likely to have elevated interferon gamma, which is indicative of a viral infection. Short-term patients were also 50% more likely to have elevated IL-12 P40, which is a pro-inflammatory cytokine produced by microglial cells (among others). The microglia are activated in the brain when there is an infection in the central nervous system. Although an elevation of IL-12 P40 is not definitive proof of neuroinflammation, it supports a study published in 2014 by Nakatomi et al. which found evidence of microglial activation in the brains of patients with ME/CFS.

The chronic phase (red bars) showed elevations in eotaxin CCL11,  GMCSF (granulocyte macrophage colony-stimulating factor receptor), PDGF-BB (platelet-derived growth factor-BB ), and CD40L. Also of note was the depression of IL-17F in both phases. (In 2008, Metgzer et al. found a similar depression of IL-17F. The authors concluded that this cytokine may play a protective role against the disease. )

Because they perform so many roles, it is impossible to make generalizations about the function of individual cytokines. Nonetheless, three of the cytokines related to the chronic phase of ME/CFS stand out.

At this point, a replication of this study is crucial. We can only hope that the NIH will undertake funding for similar immune system research.

It would also be enormously helpful if the authors of previous immune system (and other) studies went back over their data to see if there are patterns associated with short- and long-term patients which may have been lost when the results were averaged. Among the 5000+ studies that have been performed on ME/CFS patients there is a wealth of data that have yet to be explored.

Some of those "hiding in plain sight" data may lead to a biomarker.

Posted by Erica Verrillo at 5:59 AM