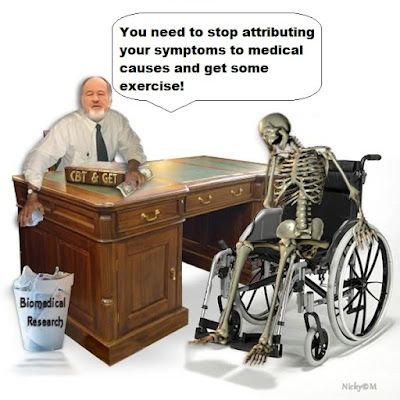 On February 3, 2016, a group of advocates wrote the Agency for Healthcare Research and Quality(AHRQ) asking them to reconsider the inclusion of the PACE trial in their review.

The AHRQ Evidence Review for ME/CFS formed the basis for the P2P report, in which GET and CBT were reported as beneficial treatments. This conclusion was based on the results of the PACE trial, a study which has been roundly criticized for its flawed methodology.

In November 2015, a group of U.S. organizations sent a letter to the U.S. Health and Human Services (HHS) asking them to address concerns raised in a series of articles about the PACE trial by journalist David Tuller. Based on these concerns and the call by the National Institute of Health (NIH) Pathways to Prevention report to retire the Oxford definition because it could “impair progress and cause harm,” the letter recommended the following steps as appropriate and necessary to protect patients:
In the AHRQ’s response, the authors of the evidence review said that they had already considered some of the concerns raised by Tuller and that the additional information would not change the review’s conclusions. This is completely inconsistent with the published review. (The evidence review ranked PACE as a “good” study with “undetected” reporting bias.) AHRQ’s response failed to address the use of the Oxford case definition as the basis of clinical trials for ME/CFS patients.

The CDC’s response stated that the IOM and P2P “have placed the findings of the PACE trial in an appropriate context for moving the field forward.” (That is bureaucratese for "we are doing nothing.") Like the AHRQ, the CDC failed to address the inclusion of studies based on the Oxford case definition.

HHS did not respond to the request to call on The Lancet to seek an independent review.

If you have not done so, please sign this petition calling for AHRQ and CDC to investigate the PACE trial.

Thank you for your December 24 response to the November 15 patient community letter requesting that AHRQ and CDC investigate the concerns with the PACE trial raised by journalist Dr. David Tuller.1 As you know, this issue is of paramount importance because of the risk of harm to patients from inappropriate treatment recommendations based on flawed studies.

The patient community has requested that AHRQ investigate Dr. Tuller’s concerns and then revise its Evidence Review in light of those concerns and with Oxford definition studies more broadly. The evidence review authors responded that the provided information would not change the conclusions of the report. We disagree.

First, while the authors acknowledge some of the problems with the PACE trial in the full evidence review posted on the AHRQ site, they did not report these problems in the article published in Annals,2 leaving the journal readers unaware of these issues. Of greater concern, in spite of recognizing these issues and stating that they are considered in rating the evidence, the authors still rated PACE as a “good” study with “undetected” reporting bias.3 Such ratings are incompatible with the known flaws in this study and call into question the validity of the evidence based methods used for such a controversial evidence base. Even based on just the information available at the time of AHRQ’s evidence review, the rating of this study and its subsequent impact on the overall treatment conclusions need to be reassessed.

Second, the patient community had also raised concerns with the inclusion of treatment recommendations based on Oxford studies. This problem was highlighted to AHRQ staff when the evidence review protocol was first issued.4 The review itself acknowledged that the Oxford criteria are problematic because Oxford can include patients “with other fatiguing illnesses.” The Pathways to Prevention report stated that the Oxford criteria could “impair progress and cause harm” and called for it to be “retired.”

And yet, the evidence review made general conclusions about the benefits and harms of CBT and GET. For example, the report stated, “GET improved measures of function, fatigue, global improvement as measured by the clinical global impression of change score, and work impairment.” It also concluded that CBT resulted in improvement in physical function scores.

Notably, the evidence review did not qualify these conclusions on treatment effects by case definition. Such statements can reasonably be inferred to apply to all “ME/CFS” patients.5

The obvious question is whether these conclusions would still be true if the Oxford studies had been removed and analyzed separately. In a reply to a published comment on the Annals article raising this issue, the authors acknowledged the importance of analyzing treatment benefits by case definition. They then stated that the improvement in physical function following CBT was seen in Oxford studies, but not in Fukuda studies.6 However, this finding was not stated in the Annals article itself nor did the article report other differences in benefits and harms by case definition. Given that Oxford is acknowledged to include patients with other diseases and given P2P’s call to retire Oxford, the failure to report Oxford findings separate from findings with other case definitions is a serious flaw of this evidence review. The study limitation statements do not compensate for this flaw.

This has real world consequences for patients. The evidence review’s general conclusions about treatment benefits are already being incorporated into clinical guidelines. For instance, referencing AHRQ’s evidence review along with the PACE trial, UpToDate recommends CBT and GET for patients diagnosed by the IOM criteria.7 But CBT and GET have been studied in Oxford cohorts, where they are used to reverse presumed deconditioning, fear of activity, and false beliefs of having an organic disease. Such treatments are obviously inappropriate for the disease that the IOM said is organic, not deconditioning, and characterized by a systemic intolerance to exertion.8 Mixing and matching patient populations in both the evidence review and in clinical guidelines is of questionable medical ethics and creates a significant risk of harm for patients.

We strongly urge AHRQ to work with the evidence review authors to ensure that the PACE trial and its impact on the evidence review’s treatment recommendations is reassessed. Further, it is critical that the authors explicitly report findings for Oxford studies separately from findings in studies using other case definitions. Finally, to ensure that findings in one group of patients are not being harmfully applied to another group of patients, it is essential that the authors explicitly state that treatment conclusions based only on Oxford studies should not be applied to patients meeting other case definitions, particularly those that require post-exertional malaise.

This matter is of the utmost importance to patients. We hope you will give it the full attention that it deserves. Contact Mary Dimmock if you need additional clarification or background.

The full report is posted on the AHRQ site at this location: http://effectivehealthcare.ahrq.gov/ehc/products/586/2004/chronic-fatigue-report-141209.pdf

• Appendix E: Quality Rating Criteria states that in a “good” study, for instance, “important outcomes are considered.” But as Tuller reported, outcomes were changed midtrial, criteria were changed, and some outcomes/analyses were not reported.

• Appendix K: Strength of Evidence tables reported Reporting bias as “Undetected” in rows that included PACE, even when the only study covered in a particular outcome was PACE.

4 The authors state that they correctly included the Oxford criteria because the protocol specified it. However, the problems with inclusion of Oxford were raised immediately after the protocol was issued on May 1, 2014.

• M. Dimmock contacted Dr. Beth Collins Sharpe (of AHRQ and ex-officio to CFSAC at the time) by email on May 4, 2014 with this concern. On 6/4/2014, Collins-Sharpe responded that she didn’t “think that the different diagnoses will be lumped together for analysis.” She added, “You’re right that it would be comparing Oxford apples to CCC oranges.“ But then the authors lumped together all definitions in the analyses.

Additionally, this issue was raised directly with Dr. Collins

See attachment 2 (Page 20) discussed the Review Protocol and stated. “At least one case definition
[Oxford] requires no more than unexplained fatigue for a diagnosis of CFS, despite the mounting evidence that such case definitions capture a different study population than definitions that require post-exertional malaise, cognitive dysfunction or other multisystem impairments.“

5 UpToDate is one example where the conclusions of this evidence review have been interpreted as applying to all patients.

It is important to note that PACE trial publications have said that the PACE trial findings also apply to patients defined by the CDC CFS criteria and the London ME criteria. But this patient characterization was done after first selecting patients by Oxford. As Dr. Bruce Levin said in Dr. Tuller’s series on PACE, it is not correct to extrapolate from a subgroup selected from a group of Oxford patients to ME patients as a class. Further, the PACE recovery publication noted that CDC CFS criteria had been modified to require symptoms for just one week and that these modifications could result in inaccurate patient characterizations. The impact of PACE modifications to the ME criteria are unknown.

In the comments section, the authors stated, “Dr. Chu’s comment regarding the importance of analyzing data based on case definitions used for inclusion to trials is consistent with our approach. For example, in the trials of cognitive behavioral therapy (CBT) using the SF-36 physical function item as an outcome measure, the two studies using Oxford criteria indicated improvement, while the two using CDC criteria reported no improvement.”

Dr. Clayton, IOM panel chair, noted, "The level of response is much more than would be seen with deconditioning," with reference to the belief voiced by some clinicians that physical abnormalities in these patients are merely a result of their lack of activity.
Posted by Erica Verrillo at 8:14 AM