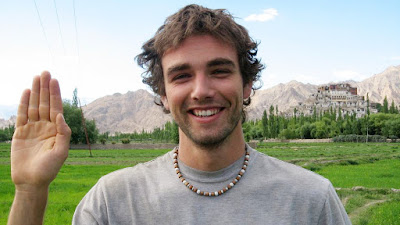 Reprinted with the kind permission of Stephanie Land.

A couple of months ago I discovered my friend Whitney had been bed-bound for over three years. His dad, Dr. Ron Davis, a scientist involved in the Human Genome Project, focused all of his time and effort in researching his son’s disease. I discovered Whitney had been featured in a documentary called "Forgotten Plague," where it showed him bent over in bed, unmoving, and incredibly thin. The sight brought me to tears. I wanted to help, and thought, as a freelance writer, I could at least publish articles about Whitney to raise awareness, and decided I needed to see his house in person. My friends didn’t seem to understand.

I told someone about the time Whitney and I had together, and said it was the perfect summer romance: two kids, in Alaska, playing in fields with muskox and caribou.

“We had a month. Exactly a month. And he was leaving and we’d never see each other again,” I said. “So we had this month of intense connection without worrying about whether or not it’d turn into a relationship. We could just be with each other, and love each other as much as we wanted without any stress over the future.”

In going to visit a friend who’s sick, and telling people I’m doing so, most of the reactions are sad moans and frowns. When I said I wouldn’t be able to see him, they’d cock their head to the side a little and furrow their brows in confusion.

“He can’t tolerate anyone being in his room,” I tried to explain. “He’s too sick. He’ll crash if his brain is forced to process who I am and why I’m there. His body would shut down.”

“But I thought he only had chronic fatigue syndrome?”

I barely understood the science of it, or how it worked. The only way I could think of explaining it was that, even though he’d spent most of his time in bed for the last three years, it was more like he’d been resting with his eyes closed.

“Imagine how you’d feel if you hadn’t had any restorative type of sleep in three years. His entire body is so exhausted, any amount of energy output he’s not prepared for shuts him down to a hibernation-type of state.”

And so it goes. I can’t imagine what it’s like for patients to explain their daily lives to friends and family or doctors.

It was late at night when I pulled into the driveway of the house where Whitney grew up. Even though his parents, Janet and Ron, had left the door unlocked for me, I still felt like a stranger creeping into the house. It’d been over 13 years since I’d seen Whitney, 10 or 11 since we’d talked on the phone, and over a year since I’d received any kind of message from him. I walked in to find Ron in the kitchen. He smiled so broadly at me, I hugged him.

Ron and Janet’s nightly routine consists of quietly shuffling in and out of the back room where Whitney lives. The room he never leaves. He has to be prepared for them to enter the room, has to know when to expect them. Once inside, they work quickly to meet his needs then leave him be. On my first night at the house, I watched all of this with a mix of awe and helplessness.

When I finally went to sleep in the living room, I could still hear Janet moving around in the kitchen.

I got up the next morning and followed Ron to his office at Stanford, which sits above a laboratory where dozens of scientists, students, and even three Nobel laureates work full-time to research ME/CFS. We walked through the building, and he pointed out work stations, robotic machines, and lab areas. As a writer, I was in a foreign land – math and science were areas I tried to avoid in college.

But sitting across from Ron at his desk upstairs, I shied a little, knowing I sat with a celebrity. Ron leads the Open Medicine Foundation as the scientific advisory board director, and is the Director of the Stanford Genome Technology Center. He is recognized as one of the leading scientists studying ME/CFS, and he fights daily to fund his research. “One of the scientists who works for me is retired, and volunteers their time,” he said. “What we need the most is funding.”


I looked down at Ron’s shoes. Whitney can’t tolerate seeing any kind of lettering at times, and Ron and Janet have to be careful to not wear clothing with any logos. On the front of Ron’s North Face, black sneakers, he’d carefully blacked out the lettering with permanent marker. It was the smallest effort that speaks to how he and Janet work diligently, changing every aspect of their life, tirelessly trying to find a cure for their son, and millions of others who suffer.

Tibetan prayer flags hang over Whitney’s door, above the porch, and all over the back stoop leading from Whitney’s room. When Janet took me out back to look at the forget-me-nots and African daisies Whitney had planted, she said he might be able to see me from the window. I got nervous and hopeful at the same time. I tried not to look in the direction of his room, but after a while I couldn’t help it. He’d planted my favorite flowers all over the yard, and they, along with the columbine he’d planted for his mom, were some of the only ones in bloom. In the backyard, Janet and I talked in whispers. I caught myself staring at the the back bedroom, at the walls that encased him. At the house that keeps him safe but imprisoned at the same time.

When I talk to Janet, I always tell her to send Whitney my love however she can. I can’t wait until the day I’m able to do it myself.

To donate to help Ron’s efforts with the Open Medicine Foundation, and further his much-needed research for a cure, go HERE.

About the author: Stephanie Land is a writing fellow for the Center for Community Change, and a board member at the Blue Ribbon Foundation. Her work has been featured through The New York Times, The Washington Post, and The Guardian. She lives in Missoula, Mont., with her two daughters. Read more of her story at stepville.com or follow her @stepville.
Posted by Erica Verrillo at 8:42 AM