In the 1990s, Dr. Cheney proposed the idea of cool-water hydrotherapy for ME/CFS patients. The idea behind the treatment was that vertical immersion in cool (not cold) water would help down-regulate immune system activation, which Dr. Cheney believed was an integral part of ME/CFS symptoms.

Allergies, flu-like symptoms, and food sensitivities are all signs of immune activation, as are autoimmune comorbidities (e.g. Hashimoto's disease). Because I had all of these, as well as heat intolerance, I decided to put Dr. Cheney's theories to the test. I immersed myself in cool water (see photo), twice a day for roughly 15 minutes. The water was too cool to simply stand, so I swam very slowly using a modified breaststroke - head above water, body at roughly a 45-degree angle - for about 15 minutes.

The first thing I noticed was that my head cleared. All my cognitive problems disappeared for a few hours after getting out of the lake. My energy levels also improved, as did my stamina.

It turned out that there was more to Dr. Cheney's theory than lymph fluid reversal. Immersion in cool water shunts blood to vital organs - specifically to the heart and brain. (Heat has the reverse effect.) Swimming in cool water for a short period of time helped clear my  head simply because my brain was getting more blood, and, as a consequence, more oxygen.

For those who are interested, I have pasted Dr. Cheney's original hydrotherapy program below. While Dr. Cheney recommended working up to an hour or more, I found that 10-30 minutes was more than sufficient.
____________________

Patients with Chronic Fatigue Syndrome (CFS) have evidence of immune activation. Many of the symptoms associated with CFS may in fact be the result of or indirectly related to an overactive immune response. A substantial reduction in these symptoms may therefore occur with the down-regulation or re-regulation of this overactive immune system.

There are two methods of interest to us which are both inexpensive and have low side effects which can conceivably provoke immune down-regulation in CFS. A low temperature method and perhaps the more powerful pressure gradient method used to accelerate lymphatic flow. These methods could obviously be merged.

Clinicians in Germany have recently used low temperature water baths to treat both Multiple Sclerosis (MS) and Chronic Fatigue Syndrome both of which have evidence of immune activation. It has been observed that Multiple Sclerosis patients worsen when they are overheated by vigorous exercise or after Jacuzzi hot water bathing. MS patients, however, seem to do better after swimming, perhaps because there is much less overheating during this type of exercise.

Several CFS patients treated at The Cheney Clinic using the German cold-water treatment method have reported "windows" or short time periods of improvement following this treatment. As in MS, it has been observed that CFS patients also worsen after being overheated, whether by exercise or by hot water bathing. The two disorders are, of course, immunologically similar in terms of immune activation.

With respect to pressure gradient therapy, there have been two double blind placebo controlled trials documenting at least partial efficacy in CFS of IV gammaglobulin infusion at high dose.

Gammaglobulin is an immune modulator and in addition to being a source of antibodies, possesses a number of immunomodulatory proteins which are known to down-regulate or re-regulate immune system function.

Tissue lymph fluid bears some resemblance to gammaglobulin as it also contains antibodies and immunomodulatory proteins. The tissue lymph in Chronic Fatigue Syndrome patients is likely to contain immune activation proteins or cytokines in excess. Given evidence in CFS of lymphadenitis and tenderness along lymph node channels, especially in the lower left base of the neck, it is likely that there is increased production of tissue lymph related to their immune activation state.

This excess lymph flow would be expected to back up from the thoracic duct and provoke tenderness in the
Virchow's node area above the left clavicle and extend up into the left middle and posterior cervical node chains and/or into the left axillary (armpit) node chain. In our experience, this is exactly what is seen in most cases of Chronic Fatigue Syndrome. Lymphatic congestion could provoke pain in the left shoulder, left arm and down into the anterior chest. Severe lymphatic congestion would produce tissue edema or fluid retention and perhaps more extensive pain and gastrointestinal complaints, all common in CFS. 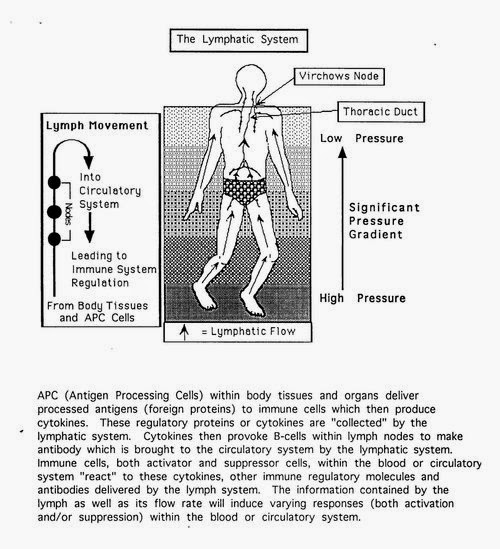 Vertical immersion in water creates a significant pressure gradient which can enhance lymphatic flow up the body and torso and into the thoracic duct which lies below the left clavicle The pressure gradient effects would act to autotransfuse tissue lymph back into the blood stream at the level of the left subclavian vein.

This autotransfusion of excess immunoreactive lymph fluid would likely provoke a down-regulatory immune response which with time could result in a significant improvement in symptoms. Factors which may enhance this lymphatic flow and its effects include water temperature, length of vertical immersion, and the number of days per week in which therapy takes place.

Temperature may be a particularly important variable. Lower temperatures may be better as noted above by the Germans; however, low temperatures may also mitigate against prolonged immersion since as the patient's body cools down, a greater proportion of their energy will be shifted to maintain body temperature, and they then may become more fatigued. On the other hand, higher temperatures accelerate immune activation states and may be counter productive.

It is likely that a temperature somewhere between 80 and 86° is the best compromise between these two issues. It is also felt that length of time per session may be important. At least an hour to an hour and a half per session will likely be required to provoke sufficient lymphatic flow in most patients. The number of sessions per week could also be important and from preliminary studies, it would appear that a minimum of three sessions per week will be necessary.

Factors which may inhibit improvement include lymphatic blockage especially at the Virchow's node area which would be suggested by discomfort in that area following total body immersion. It is also possible that sicker patients may lack sufficient ability to down-regulate against tissue lymph, and, therefore, no significant improvement will be seen. There is also an outside chance that in some patients this therapy could actually exacerbate their condition in the early stages of therapy since the tissue lymph is rich in immune augmenting cytokines.

Finally, it is possible that good hydration will also aid tissue lymph flow, and we would recommend that patients on this protocol drink at least eight glasses of water per day and that sicker patients even consider an infusion of a full liter of IV fluids prior to immersion.

It is important that the pool have water temperatures between 80° and 86°.

Patients will float and occasionally "water walk" primarily in the deep end of the pool and are encouraged to socialize while in the water. Water resistant, head-mounted tape or radio players to listen to audio tapes of books, music or radio can be used to help pass the time. Patients must remain as vertical as possible and submerged to the neck while in the water. The ideal time each patient should stay in the water and the ideal number of sessions per week may vary from individual to individual.

The Cheney Clinic recommends that patients attempt to reach a minimum immersion time of one hour per session for three sessions per week. Longer times per session or more sessions per week may be helpful for some and not for others. Each person will need to determine what is ideal for them. Please note that "water walking" or water exercising is not necessary and can be detrimental in the early phases of treatment. With time, however, water walking may be the ideal exercise for CFS patients. Remember that 30 minutes of water walking is equal to two hours of land walking. CFS patients should be very cautious about overextending in the pool.

Most patients report at first feeling more fatigued or tired after their Hydrotherapy sessions. With time, however, they will typically better tolerate the sessions.

The length of time spent in the water should be increased gradually over the first three weeks starting at 15 minutes per session at a frequency of three times per week. Add 5 to 10 minutes to each successive session over the first three weeks. Never jump ahead to longer times as this has provoked worsening of symptoms in some patients. Session length may need to be abbreviated if you are feeling worse over time and sessions should be omitted on a down-day or if you have a fever above 100 degrees. No session should extend beyond one and one-half hours and a session should be cut short if you become cold or shiver.

Patients who are cold intolerant or get too cold in the pool should invest in a wet suit. We recommend the O'Neil, full or partial length wet suit as it is relatively easy to get into and out of and can be worn to the pool. Torso thickness should be a three and limb thickness a two. (ie. a 3/2 thickness wet suit). A wet suit can greatly increase the comfort level of longer times in the pool. A wet suit will also increase buoyancy.

Patients who are improving on this therapy must guard against physical, emotional, or cognitive overextension. Patients remain brittle for some time and subject to relapse even as they improve on Hydrotherapy. What you chose to do with your improved functional status may well dictate how successful this program will be for you.
Posted by Erica Verrillo at 1:11 PM