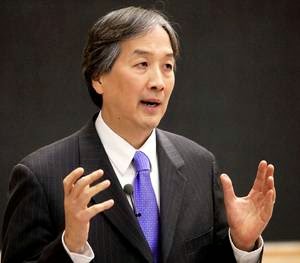 Hot on the heels of Secretary of Health and Human Service Kathleen Sebelius' resignation comes the resignation of Howard Koh, Assistant Secretary for Health (see below).

The ongoing turmoil at HHS is beyond a doubt due to the messy roll-out of the Affordable Care Act (Obamacare). Sebelius was described at numerous press conferences as being "clueless," which, as someone who was supposed to be the "face of the ACA," was unforgivable.

Given the inoperability of the federal website, the plethora of legal challenges (right up to the Supreme Court), and near constant attempts to undermine Obamacare through threatened lawsuits (which can't actually make it to court, but which get huge play in the press), is it any wonder that the top officials at HHS have "resigned"?

Adding fuel to the fire that is burning HHS's house down, was the dramatic departure of David Wright, head of the Office of Research Integrity, last March. In a detailed letter of resignation, Wright described HHS as "dysfunctional" and characterized Koh's office as “seriously flawed ...  secretive, autocratic and unaccountable.” Wright's letter got gleeful coverage from the media, which is always happy to jump at the chance of reporting a scandal. Once Sylvia Burwell took over as head of HHS, it was predicable that Koh would follow in the wake of Sebelius' hasty retreat.

After more than five years of distinguished service, Dr. Howard Koh has informed me that he will step down as the Assistant Secretary for Health to assume a new position at the Harvard School of Public Health as Professor of the Practice of Public Health Leadership.

As Assistant Secretary for Health, Howard has been at the forefront of confronting the leading public health issues of our time.  And as one of our top physicians at HHS and in federal government, he has been a trusted and respected voice in implementing and communicating the critical public health dimensions of the Affordable Care Act.

Howard’s broad range of accomplishments at HHS reflects his deep passion for promoting public health in so many arenas. He was the primary architect of landmark HHS strategic plans on tobacco control, health disparities, and chronic viral hepatitis that will leave a legacy for many years. He has led the HHS implementation of the President’s National HIV/AIDS Strategy, and the President’s Climate Action Plan as it relates to public health.  Through his work, he has promoted efforts in areas such as behavioral health, cancer control, adult immunization, physical activity and obesity prevention, health literacy, multiple chronic conditions, organ donation and epilepsy.  Additionally, he was actively engaged in matters related to the modernization of the Commissioned Corps, and oversaw the unveiling of Healthy People 2020.

Throughout his tenure, Howard has leveraged his decades of unique experience as a clinician, educator, researcher, advocate and former state public health commissioner to bring better understanding and empathy to underserved populations.  Please join me in thanking him for his tireless commitment and wishing him all the best in his new position.