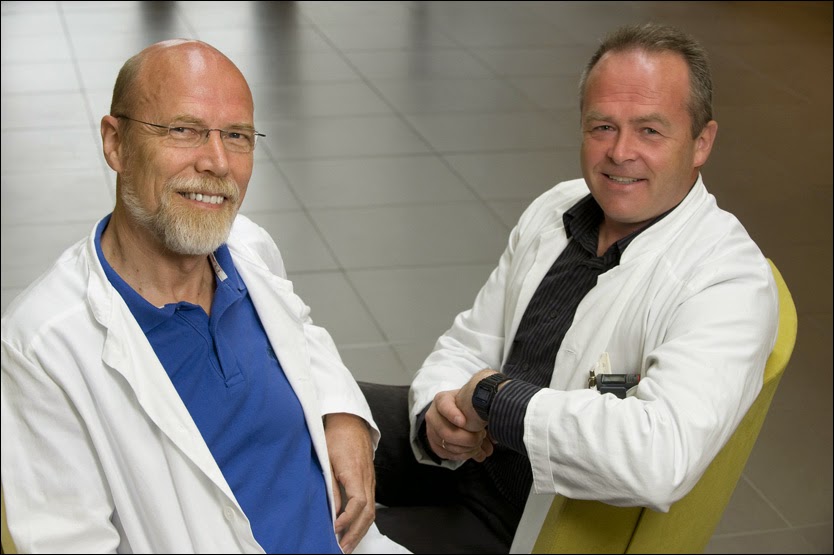 A Cambridge University radio series, The Naked Scientists, interviewed Øystein Fluge and Olav Mella on March 24 as part of a program exploring the interface of biology and psychiatry.

Also interesting is the previous interview with Belinda Lennox, who discovered that 8% of people diagnosed with schizophrenia actually have an autoimmune disease. In these patients, antibodies attack NMDA receptors in the brain, producing hallucinations. Once treated with immunosuppressants, the symptoms of schizophrenia disappear.

How does this apply to ME/CFS?

ME/CFS, like schizophrenia, is defined as a group of symptoms, which means it is not actually a diagnosis. Pneumonia, tuberculosis, and a chest cold all produce coughing, but they are not the same disease. (And just as those three illnesses are not subsets of "coughing disease" people with ME/CFS are not a subset of "fatiguing illnesses.")

In like fashion, when asked if people with the NMDA receptor antibodies constitute a subset of schizophrenia, Lennox replied that they do not. They have Anti-NMDA Receptor Encephalitis, which is a disease in its own right.

This raises the possibility that the supposed "heterogeneity" of people with ME/CFS is because they actually have different diseases. It is entirely possible that one group of people diagnosed with CFS or ME may have a post-viral illness, another may have poisoning (e.g. Gulf War Illness), another an ongoing bacterial infection (e.g. Lyme), and yet another group an autoimmune disease. While all of these may produce the same symptoms, they do not share the same pathogenesis, would not require the same treatments, and are therefore not the same disease.

Is ME an autoimmune disease?

Chronic Fatigue Syndrome(CFS), also known as ME, affects about 1 person in 500. Sufferers describe symptoms of profound tiredness and lethargy that doesn’t improve with sleep or rest. There’s currently no consensus on what might be causing the condition, there are no tests to confirm the diagnosis, and nor is there a cure. But now we may be closer to understanding what causes at least some of the cases of the condition thanks to research carried out in Norway, as Øystein Fluge and Olav Mella from Haukeland University Hospital, in Bergen, explain to Chris Smith...

Øystein - We are oncologists that work mainly on lymphomas and brain tumours. But in 2004, we observed a patient with longstanding ME who got lymphoma and she experienced a totally unexpected and very marked recovery of ME symptoms after she received lymphoma treatment with cancer chemotherapy. We speculated on this case and when we met new ME patients, it was striking to learn how similar the patients were in symptoms and how they described to be previously completely healthy and often, with an abrupt start of ME after infections. So, we reasoned that B-cells could be important in a subgroup of ME patients.

Chris - When you say, B-cells, these are the white blood cells, the lymphocytes that make say, antibodies and have a memory against infections we’ve seen before, aren't they?

Øystein - Yes, but we did a small pilot case series with a single infusion of the drug rituximab which targets these B-cells to 3 ME patients and they all had a marked but transient clinical response. We published this case series in 2009.

Chris - So, you were giving these people in the course of treating their blood cancer, their lymphoma, the drug rituximab which hits and destroys B-cells in the body which are in these patients, the cancer cells. And as a side effect almost of that treatment, these people who had previously said they had disabling symptoms of ME, chronic fatigue syndrome, they got better.

Chris - Olav, I was going to bring you in and say, what actually happened to these people when you did this?

Olav - The 3 pilot patients all had response to treatment and one thing we observed in these 3 patients is that we have a pattern of responses and relapses after the rituximab treatment with a lag time of
several months from initial and rapid B-cell depletion until they start getting clinical responses. Such patients are also seen in established autoimmune diseases after rituximab treatment. We believe that this fits with B-cells not being produced for a period after rituximab which allows a natural degradation of autoantibodies – that is antibodies that have adverse effects on bodily functions, with the symptom improving when the antibody level drops. We really think this points at ME at least in a large subportion is an autoimmune disease.

It’s also spotted that 70% of the patients with ME, they get it immediately after an infection and there's, like in other autoimmune diseases, 3 to 4 times as many women as men who get the disease. And also, a big study from the US has shown a moderate and highly significant risk of B-cell lymphoma in elderly ME CSF patients, showing that the patients may have chronically activated B-cell system. We see the same lymphoma risk also in established autoimmune diseases like rheumatoid arthritis, lupus and Sjogren’s disease.

Chris - So, putting all of this together, you get these patients who, they happen to have a lymphoma – a cancer of the blood system – but they also have chronic fatigue syndrome. You treat their lymphoma with a drug which takes down their B-cells which are the cause of their cancer. They get this pattern of, their disease recovers when the B-cells go away but with the time lag corresponding to the time it takes the B-cells to go and the antibodies to go. And then when the B-cells come back in these patients, then the symptoms come back which looks like it’s tying the two things together, doesn’t it? So, what do you think that the B-cells are doing in these people to actually make, Olav, the symptoms of chronic fatigue syndrome in those patients?

Olav - Well, we think that it is a kind of an immune response and it obviously affects some very central function in the body. We’re not at all convinced that ME is kind of inflammatory condition in the brain. Probably, more important, I think what is happening in blood vessels, we have indications that the blood vessel do not function as they should, given the dynamic flow to different parts of the body when it is needed.

Øystein - It’s like the patients have a problem in the fine-tuning or regulation of blood flow according to the demands of the tissues for oxygen and nutrients. The patients often describe they feel like running a marathon when they have done a limited exertion and they get brain fog from exertion and so on. So, our hypothesis is that the immune system somehow disturbs the fine-tune regulation of blood flow and tissues including in the brain.

Chris - Øystein, what are you now doing to try to firm this up because your initial results as you published, while very interesting are on very small numbers of patients? Obviously, we’d like to see big numbers of patients in order to make sure that this is not a statistical blip, it’s not happening due to chance, it’s real.

Øystein - To try to convince ourselves, we first did, as you say, a small randomised study which was published in 2011 with 15 patients given two infusions of rituximab and 15 patients given placebo, turn out that the 15 that got rituximab had a clinical response while 2 of the 15 in the placebo group. So, that was some kind of sign of clinical activity to us. So then we did an open label study with no placebo group, further rituximab infusion, prolonging the period with low B-cells.

We gave 6 infusions of rituximab up to 15 months and then followed the patient for 3 years. So, this study is now submitted for publication but we can say that again, 2/3 had a clinical response and the response durations were much prolonged when we gave maintenance treatment. But these two studies are not designed to give a definite answer to whether rituximab works in ME.

So therefore, we are now performing a larger phase III study in Multicentre in Norway with 152 patients. Half of them will receive 6 rituximab infusions during the first year and half of them will receive placebo. And then we will follow the patients for 2 years. And we hope that this study will either verify or refute if rituximab may give benefit to ME patients in a significant proportion.
Posted by Erica Verrillo at 5:05 AM