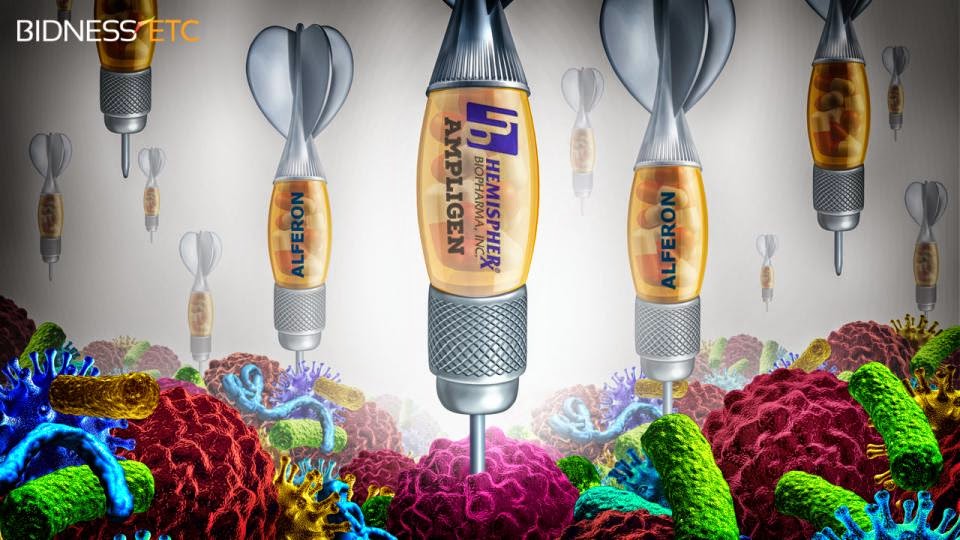 On the heels of its $8M manufacturing plant rehab, Hemispherx announced today that it has signed an agreement with Emerge to seek approval of Ampligen in Australia and New Zealand.

After decades of clinical trials for FDA approval in the US  - costing hundreds of millions of dollars -  Hemispherx has taken advantage of the IOM's stamp of legitimacy for a disease which up until now has been viewed by the medical community as a form of neurosis. A disease demands treatment, and in anticipation of a treatment for an illness that affects 17-24 million worldwide, Hemispherx was recently named one of 4 sizzling hot biotech stocks by the Wallstreet Observer.

This is the perfect time to ask the FDA to stop stalling, and to approve Ampligen in the US.

PHILADELPHIA, March 9, 2015 (GLOBE NEWSWIRE) -- Hemispherx Biopharma, Inc. (NYSE MKT:HEB) (the "Company" or "Hemispherx"), reported today that it has executed an agreement with Emerge Health Pty Ltd. ("Emerge") to seek approval of Ampligen, an experimental immunotherapeutic, for Chronic Fatigue Syndrome in Australia and New Zealand and to commence distribution of Ampligen in both countries on a named-patient basis, where deemed appropriate.

Under an exclusive license to sell, market, and distribute Ampligen in Australia and New Zealand to treat Chronic Fatigue Syndrome, Emerge will implement regulatory-compliant programs to educate physicians about Ampligen for CFS and seek orphan drug designation and approval of Ampligen to treat CFS. Hemispherx will support these efforts and will supply Ampligen at a predetermined transfer price.

Chris Rossidis, Co-Founder and COO of Emerge, said, "This agreement with Hemispherx represents an opportunity which is exactly why Emerge was formed, to provide Australian and New Zealand patients with products that their physicians believe would be helpful. Given that there is no product approved specifically for the treatment of Chronic Fatigue Syndrome anywhere in the world, and at estimated prevalence rates of CFS in Australia and New Zealand, there could be 50,000 to 150,000 CFS patients with no dedicated treatment of this debilitating disease. We hope to be able to start providing Ampligen to the most severe of these patients during this year."

Recently, a blue-ribbon committee of the Institute of Medicine (IOM) of the National Academy of Sciences (USA) issued a comprehensive report on CFS reaffirming the seriousness of the disease and the need to accelerate research on potential treatments.

Thomas K. Equels, Executive Vice Chairman and CFO of Hemispherx, said, "We are very pleased to be collaborating with Emerge to provide Ampligen under these unique access programs and to work with them to gain formal regulatory approval. While continuing our efforts to gain approval in the US, we are seeking similar named-patient programs and approvals elsewhere."

Ampligen®, an experimental therapeutic, is a new class of specifically-configured ribonucleic acid (RNA) compounds targeted as potential treatment of diseases with immunologic defects and/or viral causation.

About Emerge Health Pty Ltd
Emerge Health Pty Ltd is an innovative, specialized Australian pharmaceutical company focused on the marketing and sales of niche, high quality medicines to the hospital sector. Emerge Health is dedicated to providing exceptional products and support to ensure they meet their customers' and partners' needs and priorities.

Emerge Health has a unique, highly experienced management team with a track record of success in the Australian and New Zealand pharmaceutical markets. Our goal is to develop long term valuable relationships with suppliers and customers and to build trust through working collaboratively with our partners.

Hemispherx Biopharma, Inc. is an advanced specialty pharmaceutical company engaged in the manufacture and clinical development of new drug entities for treatment of seriously debilitating disorders especially life-threatening viruses. Hemispherx's flagship products include Alferon® N Injection® and the experimental therapeutics Ampligen® and Alferon® LDO. Ampligen® is an experimental RNA nucleic acid being developed for globally important debilitating diseases and disorders of the immune system, including Chronic Fatigue Syndrome. Hemispherx's platform technology includes components for potential treatment of various severely debilitating and life threatening diseases including cancers. Because both Ampligen® and Alferon® LDO are experimental in nature, they are not designated safe and effective by a regulatory authority for general use and are legally available only through clinical trials. Hemispherx has patents comprising its core intellectual property estate and a fully commercialized product (Alferon® N Injection®), approved for sale in the U.S. and Argentina. The FDA approval of Alferon® N Injection® is limited to the treatment of refractory or recurrent external genital warts in patients 18 years of age or older. The Company's Alferon N Injection® approval in Argentina includes the use of Alferon N Injection® (under the brand name "Naturaferon") for use in any patients who fail, or become intolerant to recombinant interferon, including patients with chronic active hepatitis C infection. The Company wholly owns and exclusively operates a GMP certified manufacturing facility in the United States for commercial products. For more information please visit www.hemispherx.net.

The information in this press release includes certain "forward-looking" statements including without limitation statements about additional steps which the FDA may require and Hemispherx may take in continuing to seek commercial approval of the Ampligen® NDA for the treatment of Chronic Fatigue Syndrome in the United States and abroad. The final results of these and other ongoing activities could vary materially from Hemispherx's expectations and could adversely affect the chances for approval of the Ampligen® NDA in the United States and other countries. Any failure to satisfy the FDA regulatory requirements or the requirements of other countries could significantly delay, or preclude outright, approval of Ampligen® in the United States and other countries including Australia and New Zealand.

Information contained in this news release, other than historical information, should be considered forward-looking and is subject to various risk factors and uncertainties. For instance, the strategies and operations of Hemispherx involve risk of competition, changing market conditions, changes in laws and regulations affecting these industries and numerous other factors discussed in this release and in the Company's filings with the Securities and Exchange Commission. The final results of these efforts could vary materially from Hemispherx's expectations. No evidence has suggested that Ampligen® will ever be commercially approved for the new potential treatment indications, including, but not limited, to the treatment of CFS.

To the extent that statements in this press release are not strictly historical, all such statements are forward-looking, and are made pursuant to the safe harbor provisions of the Private Securities Litigation Reform Act of 1995. Words such as "intends," "plans," and similar expressions are intended to identify forward-looking statements. The inclusion of forward-looking statements should not be regarded as a representation by Hemispherx that any of its plans will be achieved. These forward-looking statements are neither promises nor guarantees of future performance, and are subject to a variety of risks and uncertainties, many of which are beyond Hemispherx's control, which could cause actual results to differ materially from those contemplated in these forward-looking statements. Examples of such risks and uncertainties include those set forth in the Disclosure Notice, above, as well as the risks described in Hemispherx's filings with the Securities and Exchange Commission, including the most recent reports on Forms 10-K, 10-Q and 8-K. You are cautioned not to place undue reliance on these forward-looking statements, which speak only as of the date hereof, and Hemispherx undertakes no obligation to update or revise the information contained in this press release, whether as a result of new information, future events or circumstances or otherwise revise or update this release to reflect events or circumstances after the date hereof. No evidence is suggested that Ampligen® will ever be commercially approved for the CFS treatment indications mentioned in this release into USA or other countries.
Posted by Erica Verrillo at 1:44 PM