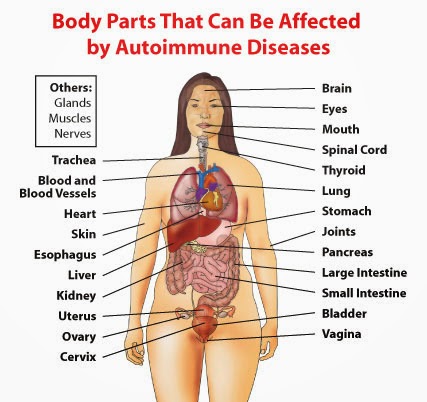 A number of researchers have proposed that ME/CFS eventually become an autoimmune disease. There is plenty of scientific evidence to support this theory.

Among other things, EBV inhibits natural killer cell (NK) function (a common immune system finding in ME/CFS patients) allowing EBV to proliferate and spread to many parts of the body. Each time EBV reactivates, the immune system responds by attacking increasing numbers of cells. Eventually, this process leads to organ degeneration. (Remember, CFS was originally thought to be a chronic EBV infection.)

Autoimmune activity has been documented in ME/CFS. (See: Is Chronic Fatigue Syndrome an Autoimmune Disease?) In an important study published in 2009, Hokama et al, found anti-cardiolipin antibodies in the sera of patients with CFS. Anti-cardiolipin antibodies (ACA) are formed when immune system cells attack mitochondria. ACA are found in lupus as well as other autoimmune diseases, which may account for the profound fatigue experienced by patients with autoimmune disease.

A number of physicians and researchers, including Dr. Kenny De Meirleir and Michael Maes, have pointed out that chronic infection eventually leads to autoimmunity. Recent research by Peterson et al. on cerebrospinal fluid in ME/CFS patients also indicates the development of autoimmunity in ME/CFS.

Given these strong overlaps, as well as the success of rituximab in treating Norwegian patients with ME, it makes perfect sense that patients with recognized autoimmune disease should share the defining symptom of CFS - fatigue.

Please see these related posts for additional information on autoimmunity and ME/CFS:

Press Release: American Autoimmune Related Diseases Association (AARDA), March 23, 2015. Fatigue described as "profound," "debilitating," and "preventing them from doing the simplest everyday tasks," is a major issue for autoimmune disease (AD) patients, impacting nearly every aspect of their lives. It affects their mental and emotional well-being and their ability to work. And while most AD patients have discussed their fatigue with their physicians, many have not been prescribed treatment for their fatigue.

Major findings include:
Fatigue impacts nearly every aspect of AD patients' lives including overall quality of life (89 percent), career/ability to work (78 percent), romantic (78 percent), family (74 percent) and professional relationships (65 percent) and their self esteem (69 percent), among others.

"In this busy, busy world, it's normal to be tired, but the kind of fatigue autoimmune disease patients suffer from is anything but normal," said Virginia T. Ladd, President and Executive Director of AARDA.

"The overwhelming response AARDA received to this survey shows without a shadow of doubt that fatigue is not a 'fuzzy' symptom, it's real. Yet, for too long, it has been ignored and/or misunderstood by the medical community and the public at large. It's time we bring more research funding to this issue to advance understanding and effective treatments for fatigue."

The survey revealed that fatigue has a significant impact on AD patients' mental and emotional well-being. They say it has resulted in increased emotional distress (88 percent), a sense of isolation (76 percent), anxiety (72 percent) and depression (69 percent).

According to one AD patient, "It's difficult for other people to understand our ongoing fatigue when it can't be seen by them. It's so hard just trying to get others to really, really understand how very tired you are sometimes -- even our own doctors don't understand. One wonders if even our doctors may think we are for the most part just mental cases and/or whiners."
Posted by Erica Verrillo at 4:29 AM