I have never been so proud of the ME/CFS advocacy community as I was on January 27 when 14 articulate, intelligent, determined patients and representatives told the IOM panel to go home. 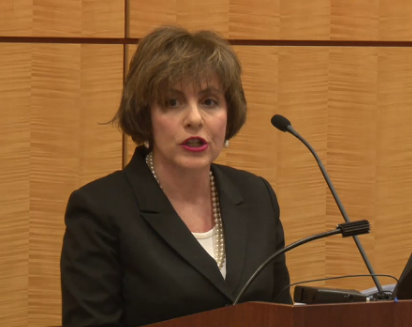 My name is Mindy Kitei, and I’m a journalist. I’ve been reporting on myalgic encephalomyelitis for more than twenty years and started my blog, CFS Central, in honor of my friend Nancy Kaiser, who died of the disease in 2008.

Fifty of the finest ME experts believe that the IOM lacks ME expertise and that the government should adopt the Canadian Consensus Criteria definition immediately.

Patients believe that the IOM will devise a name worse than chronic fatigue syndrome, something like “chronic multi-symptom illness,” the meaningless moniker the government and IOM use for Gulf War Syndrome. On the IOM website, a curious diagram that accompanies an article by Dr. Daniel Clauw, lists several diseases: Gulf War Syndrome, fibromyalgia and CFS, among them, all covered under the big umbrella of somatoform disorders, psychiatric ailments that just LOOK like physical diseases.

Tell that to Nancy Kaiser, who experienced multiple seizures a day. Tell that to Jerry Crum and Leanne Hyneman, both of whom I interviewed in 1994 and have since died from ME. Jerry was in his fifties; Leanne, in her early forties.

Patients believe that the IOM committee will lump real ME patients with the flawed cohort that CDC studies. Dr. Leonard Jason, the premier expert on ME definitions, published that CDC’s cohorts have depression, not ME. Imagine studying HIV—but looking at patients who suffer only from depression, not HIV. It’s insanity.

Not only does CDC study the wrong patients, it conducts the wrong studies. Take its new exercise study. The hallmark of ME is post-exertional crashing.

So what is CDC doing? A one-day test. Why does CDC want patients to look like couch potatoes? So that the government can write off the ME epidemic of seventeen million souls worldwide, one million in the U.S., the same number with HIV/AIDS.

The best predictor of future behavior is past behavior. In the IOM’s book Gulf War and Health, the IOM Gulf War committee writes about CFS—since the symptoms resemble Gulf War—and recommends graded exercise for CFS, which can lead to crashes that last months, even years. Graded exercise is also recommended by CDC and psychiatrists like Simon Wessely—both of whose work the IOM Gulf War committee endorsed. 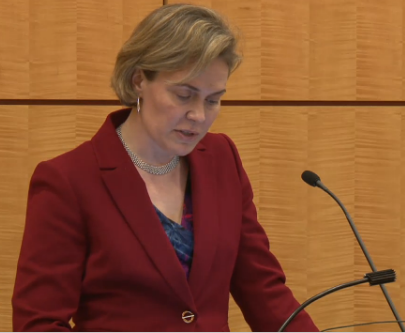 Hello. I'm Jeannette Burmeister and I'm an attorney. I've heard some people at HHS are confused about patients' deeply-felt opposition to your project. Let me explain in simple terms why:

HHS hijacked the federal CFSAC recommendation and ignored an unprecedented and impassioned request by 50 international M.E. experts to cease and desist.

The majority on your committee are non-experts.

HHS insured bio-medical research will be not be funded or replicated and yet ordered an evidence-based review. You are hurtling down the psychological rabbit hole, repeating the Gulf War Illness anti-science debacle.

HHS hired an institution without experience or authority to develop case definitions.

An excellent case definition, based on science, already exists and the experts endorsed it.

The IOM has a fatal organizational conflict of interest. I have filed a complaint with the Office of the Inspector General. A formal investigation is under way.

HHS has broken federal law as to FOIA compliance. 2.5 weeks ago, I filed a lawsuit against HHS and NIH in U.S. district court.

HHS issued misleading statements about the nature and terms of, and parties to, the contract.

And finally, hundreds of thousands of patients' lives were ruined or ended by a federal consensus definition in 1994. We have long memories. Patients are furious and alienated by what can only be called state-sponsored bullying.

Given your time frame and the meager "budget-dust" sum provided to you, not even a thoroughliterature review is possible. Do you really expect anyone to consider the definition you produce to be science-based? Everything about this is lose-lose.

You may attempt to serve as oracle of the biased and obstructive NIH/CDC, but your conclusions will be rendered meaningless soon enough. Academic scientists are closing in on the cause of this disease. In due time, your consensus "fairy dust" will be headed for Ripley's "Believe It Or Not"-next to the entries about the earth being flat and the sun revolving around the earth. 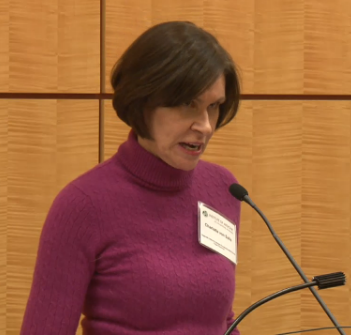 What can you do?

You can assess this situation as scientists and physicians.

Dr. Nancy Lee is on record stating that Secretary Sebelius told her a case definition is a clinical decision that has to come from the clinical community, not the Federal government.

Yet you have just heard from three representatives of the Federal government. And you have been told to coordinate and work with this study's sponsor, the NIH, through its Pathways to Prevention program.

This is in direct violation of IOM's study process and presents a blatant conflict of interest.

How is this an independent and objective process? How is this about science and medicine?

If you think your task order isn't politically motivated, consider that the CDC has been well-aware of the scientifically sound and expert-driven Canadian Consensus Criteria for over a decade - yet refuses to take down its own diagnostic and treatment guidelines, the harmful and misleading CFS Toolkit.

Your task, to develop clinical diagnostic criteria for ME and CFS, has already been accomplished.

Two primers, specifically aimed at clinicians unfamiliar with the diseases, are already available.

Both are based on criteria developed by disease experts and published in peer-reviewed medical journals. Both are available as easy -to-distribute pamphlets.

I am referring to the Overview of the Canadian Consensus Criteria and the ME-ICC Primer for Medical Practitioners. The latter is an update of the former to reflect scientific developments through 2011.

That's right. It's based on science, not politics.

And the combined knowledge of experts who collectively have diagnosed and/or treated more than 50,000 patients with M.E., have more than 500 years of clinical experience, have approximately 500 years of teaching experience, and have authored hundreds of peer-reviewed publications.

You cannot do better. Some of you are new to this disease.

How would you feel if non-experts decided to diagnose heart failure? Or lymphoma? Or Lupus?

If you truly want to fulfill your task, all you need to do is read, share, and distribute these pamphlets. Both are available from the UK charity, Invest in M.E., and can be downloaded from a number of websites.

Both can and should be distributed. Each one of you is a unique position to do just that. Order these guidelines, print them out, or at least share the websites URLs with your networks. Use your positions to get these documents out to primary care physicians.

Tomorrow, tell the IOM to stop this needless study. Defer to the collective judgment of your eminently qualified colleagues and do your part to get the CCC officially adopted.

Resign from this panel. 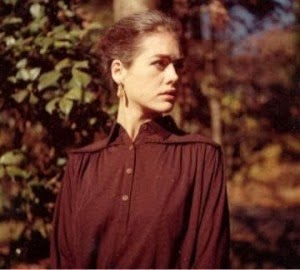 There are people in this country who spend decades of their lives in silent, darkened rooms, crippled and in excruciating pain.

They have orthostatic intolerance of variegated causes (such as low blood volume, cardiac diastolic dysfunction, and haemotological and RBC pathologies) — they are unable to sit up or to stand.

They suffer hyperacusus — they cannot tolerate any light or sound without becoming severely more ill and without suffering additional pain that does not subside, nor can they summon the strength to speak.

Some are too weak to feed themselves, others paralyzed.

Many cannot even focus on a thought.

A significant group of such patients have died of complications of this disease — some at a young age, others some 20 years earlier than their peers of similar backgrounds and socioeconomic stati, according to a paper by Dr. Leonard Jason.

Known as Myalgic Encephalomyelitis, this disease has a long history. It was recognized by the World Health Organization as a neurological disease in 1969.

These severely ill people, and others with the same or similar yet milder symptoms, have been tossed into a pot with a group of other individuals whose symptoms look strikingly different — persons with depression, some with something so mild as unspecified fatigue, others with pain syndromes like fibromyalgia.

These are not the same diseases as Myalgic Encephalomyelitis.

This pot is what the government calls “Chronic Fatigue Syndrome” — a name that was the government’s 1988 response to an outbreak of M.E in Lake Tahoe in the early 1980′s, the Holmes criteria.

Unfortunately, the Holmes criteria was broadened in 1992 with the Fukuda criteria, and even further with the Reeves criteria.

Some youths with M.E. have died or become worse due to inappropriate treatments (Cognitive Behavioral Therapy and Graded Exercise Therapy) based on these “fatigue” definitions.

M.E was never recognized by the U.S government, but it is not new or fatigue based.

It is scientifically unsound to take people who are sick with M.E. and throw them into a pot with people whose illnesses look very different, and then to conclude that M.E. has no universal biomarkers.

There are more than 500 papers in the medical literature that show measurable physiological abnormalities in the melting pot of “CFS.”

These papers show a pathophysiology for all three of the essential components of the M.E. criteria that Dr. Melvin Ramsey described: circulatory, immune, and muscle impairment.

Articles describing all of these pathophysiologies in M.E patients, although published under the name “CFS,” are available on my website.

Although the cause or causes of M.E. are unknown, the pathophysiology of M.E is not “medically unexplained.” It is available to anyone willing to read the research.

Patients who show these abnormalities should be separated from the “CFS” pot and studied separately as M.E patients.

The Canadian Consensus Criteria (CCC) is a description of these M.E. patients and requires all three of the components that Dr. Ramsey originally described to meet the definition of M.E.

It appropriately identifies milder M.E. patients and those who are homebound and/or bedridden.

“CFS” does not name a specific disease. The study of “fatigue” and the term “CFS” should be abandoned.

We urge that the IOM cease its re-definition effort and recommend that the government adopt the CCC as a clinical and research definition of M.E. until more research can be completed.

Further, unrelated diseases such as fibromyalgia, depression, or unspecified fatigue should not be lumped or studied with M.E.

We further urge that M.E be called by its long-recognized name by the World Health Organization, “Myalgic Encephalomyelitis.”
Posted by Erica Verrillo at 12:23 PM