Darwin, IOM, and the Dating Game 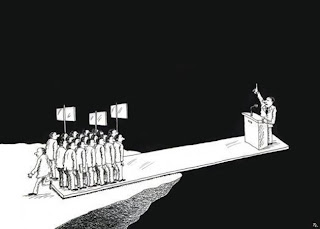 The controversy surrounding the IOM contract continues unabated. On her blog, Occupy CFS, Jennie Spotila has posted a detailed explanation of the process through which IOM reports are generated. Several steps are involved, including a "statement of task," accepting and approving nominations for the IOM panel, drafting a report, reviewing the report, and, finally, submission of the report for independent review. Conflicts of interest among panel members can lead to their disqualification, as will biases that might affect their judgment.

The entire process sounds carefully planned, well delineated, and comfortingly bureaucratic. There are so many clauses, sub-clauses, stipulations and guarantees, that these steps must surely produce something objective, fair, and in our best interests.

What needs to be kept in mind is that it is possible to appear to meet the letter of the law without in any way conforming to its intent. This is known as rhetoric.

Darwin and the sex lives of organizations

The primary goal of any organization is to perpetuate itself. From a Darwinian perspective, this means that it must live long enough to reproduce. It may sound slightly absurd, but organizations survive in much the same way as any other species: by mating with other similar organizations, and spawning committees with agendas corresponding to those of their parent organizations.

The question is: With which organizations has the IOM mated?

The answer to that question may be found in the IOM's report: Gulf War and Health: Treatment for Chronic Multisymptom Illness ( 2013 ) / 5 Review of Treatments for Comorbid and Related Conditions. (You can read the full text HERE.)

"Two specific therapies are recommended for people who have CFS: CBT and graded exercise therapy (GET) (CDC, 1994, Mayo Clinic staff, 2011, National Collaborating Centre for Primary Care, 2007). CBT provides a framework for patients to change how they think and feel about their illness and teaches behaviors that provide patients with a greater sense of control over symptoms (CDC, 1994; National Collaborating Centre for Primary Care, 2007). Exercise has been associated with the body’s natural release of endorphins, natural pain relievers. Both exercise and endorphins have been shown to improve a number of the symptoms of CFS and related syndromes (Cleare, 2003; Harber and Sutton, 1984)."

Ignoring the actual treatment recommendations for a moment and focusing instead on the citations, we see that the origins of the IOM's treatment recommendations are comprised of the CDC, the UK's National Collaborating Centre for Primary Care (originator of the NICE guidelines), and the Mayo Clinic staff - which is simply an iteration of the CDC. (The two research citations serve as filler: the Cleare study - from the Institute of Psychiatry in London - did not investigate exercise as a treatment, and the Harber and Sutton study had nothing to do with either ME or CFS.)

In the remaining paragraphs of this section, only the CDC and National Collaborating Centre for Primary Care are cited.

Given the paucity of references to actual ME and CFS studies, and no inclusion at all of organizations that specialize in researching ME or CFS (e.g. Simmaron), we can only conclude that the IOM prefers to mate with its own kind, which, in this case, are not medical experts, or even medical researchers, but government agencies.

What can we expect?

By now, we have a good idea of the sort of report the IOM will produce, because we can read what was recommended for Gulf War veterans. But there is more to this story.

In March 2013, Mr. Anthony Hardie, a Gulf War veteran, testified before the Veterans’ Affairs Subcommittee on Oversight and Investigations alleging subversion of the intent of the IOM report. Mr. Hardie testified that the report was manipulated to form a "treatments" panel that "diverged radically from both the Congressional authorizing language and established science." Mr. Hardie went on to say that "the panel was charged by VA to conduct a literature review rather than to consult with knowledgeable medical practitioners experienced in treating ill Gulf war veterans.  And nearly all of the first presenters focused on "stress-as-cause", psychological, and psychosomatic issues – all debunked years ago."

The literature review, as indicated by the references in the CFS section, was highly selective, obviously cherry-picked to conform to the panel's agenda. In this way, the panel subverted the intent of the law in order to create something that appeared to satisfy Congressional requirements, while simply fulfilling an agenda of its own.

Going over their heads

In spite of having a government that is "by the people, of the people, and for the people" it is clear that the institutional commitments of government agencies are to themselves, rather than to citizens - which is why we have citizens' groups. This is the way it should be. Institutions are given a great deal of power over individuals, and the only way to limit that power is through the watchdog activities of citizens, and through our own insistence on following not just the letter, but the intent of the law.
Mr. Hardie made it clear in his testimony that the manipulation of the IOM report to re-interpret GWI as a psychological ailment should be considered a breach of the law. Among others, he recommended the following actions:

While those of us with ME/CFS are not the responsibility of any institution - unlike veterans, who are supposedly represented by the VA - there is no reason why people with ME/CFS can't make the same demand of HHS. It is a branch of government that we not only pay for, but which is entrusted with our welfare.

The squeaky wheel gets greased

In a recent conversation with a representative from one of our federal departments, I asked the question, "What can I do?" The answer was, "Complain, complain, complain."

What we can do:
In the end, all of our complaints will amount to "public outcry." History has proven that with enough public outcry, even the mightiest institutions will bend.

Posted by Erica Verrillo at 5:13 PM