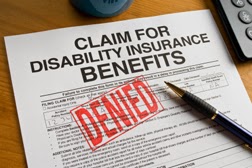 This article (see below) appeared a few days ago on the website Lawyers and Settlements. For those of us who are battling private insurance companies for disability benefits, Christine's case is enlightening.

Why was Christine refused long-term disability by her private insurer? According to the article

"insurance representatives don’t believe [people with CFS] are disabled. Instead, they are often considered “lazy” and “hypochondriacs,” and capable of work."

To clarify: Insurance claims are not denied based on the private beliefs of insurance representatives. Christine's claim was denied because Cigna has a policy regarding "chronic fatigue syndrome" based on information supplied to them by doctors employed by the company as medical consultants. These doctors, in turn, base their opinions on documents they have read - such as the PACE trials, and other pseudoscientific studies -  that are, in large part, influenced by insurance companies which do not want to pay for long-term disability.

It's a vicious, and venal, circle.

Detroit, MI: Despite the fact that disability insurance is supposed to protect policyholders in the event they become disabled prior to retirement, some insurance companies still practice bad faith insurance by wrongly denying disability claims for chronic fatigue syndrome. Why was Christine denied benefits by Cigna, her Insurer, yet immediately recognized as disabled by Social Security?

Read the rest of this article HERE.
Posted by Erica Verrillo at 8:45 AM